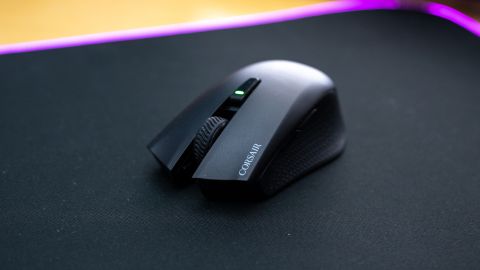 Wireless gaming mice to this point have largely been an expensive luxury as they’re often billed as the flagship model from peripheral makers. The Corsair Harpoon RGB Wireless, however, breaks this trend by being the most inexpensive $49 (about £40, AU$70) wireless gaming mice.

But don’t let that dirt-cheap price make you think this is a sub-par mouse in any way. It features a top of the line sensor, mouse buttons, RGB lighting and overall built quality making it a worthy match for one of the best mice we’ve ever reviewed.

The Corsair Harpoon RGB Wireless features a seamless, minimalistic design that we really dig. The entire top piece is made of one contiguous piece of plastic that starts from the back of the mouse, slopes over and flows out to two distinct mouse buttons without interruption. Meanwhile, the sides feature a diamond-texture, rubber material for added grip.

This gives the overall mouse an almost perfectly uniform look. In fact, basically won’t find any gaps on this mouse except for the prominent fork where the scroll wheel sits suspended between the separated mouse buttons.

Although this large gap gives the Harpoon RGB Wireless a very cool silhouette, we’re not crazy about the way it also pushes its micro USB charging port into the middle of the mouse. Unfortunately, this design means you’ll always have to charge the mouse with its included cable, whereas we’d much rather be able to plug in any odd micro USB we have lying around.

Weighing in at only 99g and ergonomics distinctly designed for right-handers, this mouse might not be for everyone, but we love it for the most part. The mouse has an hourglass-like shape a claw gripper’s fingers will naturally wrap around. Meanwhile, palm grippers will find mouse’s gentle slope rolling towards the right will allow their hand to comfortably rest on it even while they’re clicking frantically.

The side buttons are also elevated perfectly to stay out of the way as we’re moving around and be accessible when we need them. Underneath the mouse, you’ll find a switch to swap the between operating on 2.4GHz or Bluetooth LE 4.2 wireless modes and a small compartment that holds the wireless receiver – which is a feature we always want with every wireless mouse.

The Harpoon RGB Wireless doesn’t miss a beat whether you’ve have it wireless connected to a PC or hooked up through USB. Its 10,000 DPI optical sensor tracks even the slightest movement, though, at this point we’re more fans of low DPI and wide arm movements.

No matter which sensitivity level you choose to go with you can be confident your commands will be relayed in-game just as quickly as you click. This is all thanks to Corsair’s newly coined Slipstream Wireless technology, which guarantees a sub 1ms latency and automatically shifts wireless frequencies to ensure your signal stays in the fast lane.

According to Corsair, the Harpoon RGB Wireless is rated to last for 30 hours straight with lighting turned on and in its 2.4GHz Slipstream Wireless mode. We find no reason to refute that claim as we’ve been testing it for a week straight and still haven’t had to plug it in yet.

If you’re looking to squeeze more out of this mouse, you could switch it to Bluetooth mode for another 10 hours of usage. Turning off the RGB lighting and switching the mouse to a power saving mode can also extend it to a maximum of 60 hours of continuous use.

The Corsair Harpoon RGB Wireless is almost too good to believe, especially due to its incredibly low price. Just before we finished our review, we called up our Corsair rep just to make sure we were right about the $49 (about £40, AU$70) price and it wasn’t a dream.

This would have been an incredible wired mouse for its price, but the fact that it’s also wireless and therefore infinitely more complicated from an engineering standpoint (read: normally expensive) makes it that much better. If you’ve been chomping at the bit to buy a wireless gaming mouse, but just couldn’t stomach the higher price tags, the Corsair Harpoon RGB Wireless is a perfectly affordable way to experience freedom from wires.