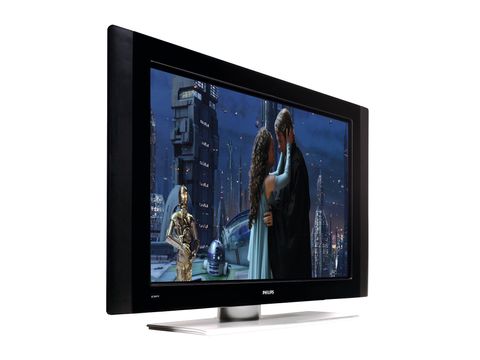 A respectable 50-inch plasma for a mouthwatering price

There are cheap TVs, and then there's the Philips 50PF7521D: a 50in plasma TV that can be yours for just - drum roll please - £1,300. This makes it the single cheapest 50in plasma TV we've ever seen. Which is just fine and dandy, of course, provided the measures taken to make such a price possible haven't stripped it of all performance quality.

The 50PF7521D is not a bad looker for such a cheapie, boasting the glossy black finish that's all the rage right now. Our only complaint is that its screen frame is larger than many folk may feel comfortable with.

The set's connectivity is slightly better than we'd expect for £1,300 too, in that it includes not one but two HDMIs alongside the usual component, composite, S-Video and Scart options. The only compromise is that you don't get a PC input, leaving the HDMIs as your only PC port of call.

Expecting few if any features on a £1,300 50in plasma TV, we're pleasantly surprised to turn up not only a digital tuner complete with full 7-day EPG support, but also Philips' Pixel Plus technology.

Admittedly it's at least two generations behind the latest Pixel Plus 3 HD incarnation - and as such will generate more noise and look slightly less natural in its effects than the newer versions. But with its talent for adding detail to (especially standard-def) pictures, we'd still rather have it than not.

Other bits and bobs tucked within the screen's simple onscreen menu system include a contrast booster, noise reduction routines, and even some basic picture in picture tools.

Happily, the pleasant shocks the 50PF7521D throws up continue with its pictures. For instance, although black levels aren't the deepest we've seen during Revenge of the Sith's opening space battle, but they're not as greyed over as might be expected for this price point, and retain a natural, detailed look compared with a couple of the 50PF7521D's LCD contenders.

The hi-def picture is also surprisingly crisp and sharp, picking out every tiny detail of the surfaces of the huge ships at the heart of the battle.

The film's endless action sequences benefit from some smear-free motion handling, meanwhile, and colours during hi-def footage are for the most part very good, delivering a winning combination of vibrancy and accurate toning.

The only real problems we have with the hi-def pictures is an occasional slight dithering effect over skin tones during camera pans or horizontal motion, and a slightly gritty look to some dark scenes.

One final niggle is that the TV seems to go through agonies when switching between standard-def and hi-def when using the HDMI. But it always gets there.

Anyway, with a solid audio performance joining forces with the likeable pictures, the flaws we've reported really don't seem too heavy a burden to bear in return for getting a 50in flat TV for just £1,300.