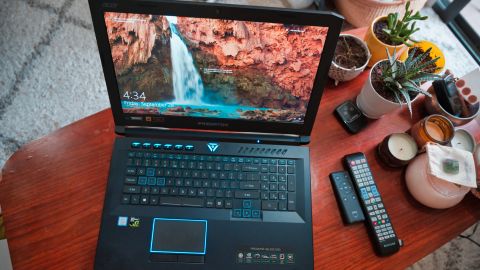 The Acer Predator Helios 500 is a beast in almost every sense, from its powerful engine that can handle any game to its massive size. If you’re just looking for a monstrous mobile PC gaming machine, this laptop will impress. However, if you’re looking for a more immersive experience, be prepared to shell out more cash for peripherals.

There’s no doubt that the Acer Predator Helios 500 is a powerful gaming laptop. It’s a beast, both physically and figuratively, so much so that it almost feels like a high-powered gaming desktop computer stuffed in a laptop that’s bursting at the seams. This boasts all the gaming power you can currently put in a laptop, and it can handle every game you throw at it, maxed out settings and all, without issues.

Despite all that power under the hood, however, its peripherals leave something to be desired, which is even more glaring considering that steep price tag (our review configuration will set you back $2,499 and change). The trackpad is bad, the keyboard is decent but set too far back from the bottom edge, the sound is lackluster even with a boost, and the battery life won’t even last you a Marvel movie.

But, it’s not all bad. Besides the laptop’s performance, it also has a few aces up its sleeves. Let’s delve deeper to find out more about the Acer Predator Helios 500 and its features.

Here is the Acer Predator Helios 500 configuration sent to TechRadar for review:

The Acer Predator Helios 500 has three different configurations in the US, all of which have Windows 10 installed. The most basic of these is the $1,999 model, which features an Intel Core i7 processor, as opposed to our review model’s i9 processor, and less storage space.

To get our review model’s specs, you will have to shell out $500, or around $200 more, to get the mid-range model that features the competitive AMD Ryzen 7 2700 processor (octa-core, 3.20GHz) but only has a solid state drive and no discrete graphics card, instead using AMD Radeon RX Vega 10 integrated graphics.

In the UK, there are seven configurations available, the most affordable of which will set you back £1,799 and has the same specs as the basic US model (though you can opt for a 512GB SSD in lieu of the 1TB HDD + 256GB SSD combo). For something similar to our review unit configuration, except with only a 1TB HDD and 256GB SSD, it’s £2,499. For a splurge, there is a £2,799 configuration with the same processor, GPU and storage, but 32GB RAM.

Only one configuration is currently available in Australia. Setting you back AU$2,999, this configuration boasts the same GPU and memory, but with an i7 processor and and a 1TB HDD + 256GB SSD storage combo.

We’ve got mixed feelings about the Acer Predator Helios 500 design. On one hand, it’s got a sturdy build that you can tell will last, a matte finish that doesn’t easily track fingerprints, that subtle gaming look that makes it accessible to the non-hardcore gamers, and blue trimmings instead of the usual red.

The laptop also has a plethora of ports, enough that you can connect it to three displays in addition to the laptop screen, which itself is already impressive.

In addition, the laptop also has two aeroblade 3D fans, five heat pipes, four exhausts, and two intakes for better air circulation, so that while the laptop does get a little hot, it manages to keep the heat down even when it’s working on ultra settings in games. Acer also includes easy access to your hard drive and RAM via a quick access panel in the back, making it easy for upgrades.

On the other hand, the Acer Predator Helios 500 is just heavy and massive. This isn’t a laptop you can just stuff in your backpack and take anywhere with you. This is more like a fixed gaming station that takes up less space than an actual PC. You can take this laptop to your living room, if you want to squeeze in some gaming while watching TV, but you wouldn’t want to lug it around while you’re traveling. Heck, even its power supply is almost as big as your face.

Plus, the laptop has side-firing vents, one of which directly blows hot air in the direction of where your mouse and mouse hand would be, and its display has thick, almost 1-inch bezels. It’s not the most thoughtful design.

Likewise, the trackpad is clunky, isn’t responsive and lags a lot. It’s possibly one of the worst trackpads we’ve tested, and definitely not fit for gaming. We know that trackpads are typically not ideal for gaming but, considering this is a $2,500 gaming laptop, you’d think they’d at least give it a decent one.

At least the keyboard is decent. It doesn’t have any special features that give you a real edge in competitive gaming – shorter travel, for example – but it is responsive and boasts anti-ghosting for 18 of the most used keys, so it doesn’t miss any presses. At the top, the keyboard also has five special hotkeys, to which you can assign presets for fan control, overclocking and more.

Then, there are the number keys, which when combined with the Function button, give you quick and easy access to settings like the keyboard backlights, WiFi, mirroring and volume controls.

The keyboard just is not impressive, though, and it has its share of flaws: first, it’s set so far back from the bottom edge that it feels like you have to stretch your arms to get to the keys; second, the special hotkeys won’t work from time to time, with the only option being to reset the computer or re-install the PredatorSense software to get them working again.

The sound isn’t that impressive either. The laptop has a built-in 2.1 sound system that supposedly boasts TrueHarmony technology for sound accuracy, but it needs the Waves MaxxAudio app to boost the volume.

Admittedly, volume gets really loud with the software, but the sound quality isn’t better with it. The sound is compressed, perhaps to make it louder, but that only squishes the mids, pushes the highs and lows and narrows the soundstage so that everything sounds like it’s coming from just one direction. It’s not bad for gaming, with sounds that are built and already processed and compressed, but it’s not good for listening to music.

That said, we actually enjoy the display. The Acer Predator Helios 500’s 1080p, 17.3-inch IPS display has a 144Hz refresh rate, making it accurate and responsive and an excellent color reproduction that’s on the warmer side. Games and movies look great on this display, and you get a lot of crisp details.

We found a dead pixel on our review unit, but that could have just been a manufacturing error. Other than that, we’ve got no complaints regarding the display. The 720p webcam ain’t shabby either.