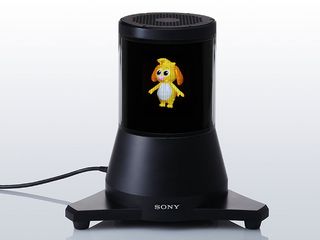 Sony's new display can be viewed from all angles

Sony's 3D express train continues going at top speed with the announcement that the company is set to show off a new 360-degree 3D prototype display.

The gadget is said to be autostereoscopic, so can work with out glasses and will stand at around 10.6-inches tall. Which means it could well become the ultimate desk toy.

There's no word as of yet what the device will be used for, but pictures of the yet-unnamed display show it beaming a lovely image of a cartoon dog. Whether this means it can be used as a very high-end Tamagotchi remains to be seen.

It's more likely that the display will be used as a cool digital photo frame.

While the use of glasses aren't needed, the display is hardly HD – projecting LED images as 96x128 pixels and 24-bit.

If you want to see the device in action and are in Tokyo, then pop along to the Digital Contents Expo where it will be show off from 22 October.