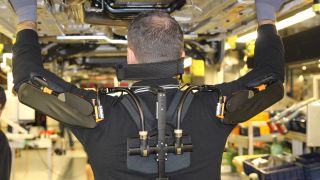 Not all roles in factories can be automated – some still require the skills and adaptability of a human – but such jobs can put a lot of strain on workers’ bodies. To combat that problem, companies (including some of the world’s biggest car and plane manufacturers) are augmenting their employees with mechanical exoskeletons. These might look like something from a sci-fi film, but they can be life-changing.

“People have told us they can retire healthy now,” Joseph Zawaideh, co-founder of Levitate Technologies, tells TechRadar. Levitate is the company behind the Airframe – a super lightweight exoskeleton used by companies including Toyota, BMW and John Deere.

Zawaideh, vice president of marketing and business development, co-founded Levitate with CEO Mark Doyle in 2014. Both partners have a background in medical devices, and Doyle’s previous project was miniature surgical instrumentation.

“He noticed surgeons getting fatigued all the time by operating on patients all day long,” says Zawaideh, “and he realized that the only way to resolve such a challenge for surgeons’ musculoskeletal systems must be to design and invent a wearable exoskeleton that provides upper extremity ergonomic support.

"That way, the ergonomic support can move around with the surgeon, with their arms, and relieve load on their shoulders and backs by transmitting the load to the outside of the hips.”

Zawaideh and Doyle’s idea attracted a lot of funding, and soon sparked interest from customers outside the medical profession. “Industrial customers like BMW, Toyota and John Deere found out about the exoskeleton, and when they prototyped it they decided to start placing purchase orders right away. So it was invented for surgeons, but it ended up being commercialised for now in industrial uses.”

The surgical exoskeleton is still in development, having been spun off as a different company, but it’s not on the market yet. Manufacturing is where the Airframe has found its feet.

If you’ve ever struggled to replace a tricky lightbulb, you’ll know the discomfort that comes with working at height for any period of time. Performed regularly, that kind of work can easily lead to long-term injuries.

“You can’t find a single automotive assembler who is retired now, who doesn’t have back or shoulder problems,” says Zawaideh. “It’s an inherent problem for people who work with their arms throughout their career.

“When people are working with their arms, there is a definite over-exertion over time for their shoulders and their neck and back. Raising arms when you are welding or assembling a car or an airplane or railroad, or maintenance of equipment – fatigue kicks in during a full shift of repetitive work like that, and that ends up resulting in either reduced productivity or, over time, injury in the shoulder for example.”

That’s where the Airframe comes in – an unpowered exoskeleton that uses a system of carefully engineered pulleys to direct forces away from the wearer’s upper body to their outer thighs.

“Instead of the muscles doing 100% of the work, which leads of fatigue and injury, now the muscles are doing 70% of the work,” Zawaideh says. “That 40% break that the body is getting makes a world of difference to the worker in terms of reduced fatigue, improved productivity and less injury over time.”

The Airframe hasn’t just proved its mettle in a lab – Levitate has conducted clinical trials with sensors attached to eight muscle groups in workers’ upper bodies, monitoring activity as they go about their jobs. The results – published in peer-reviewed journals – showed statistically significant reduction in muscular activity in the shoulders, neck and back when employees wore the Airframe.

However, all that research wouldn’t mean much if the device was a nuisance to wear – workers would just refuse to use it. The designers had to consider weight, bulk, comfort and convenience, ultimately aiming to make the Airframe no more of a hassle to use than a pair of safety glasses or steel toe-capped boots.

“The exoskeleton technology has been around for a while, but it’s not been adopted by workers on a daily basis or by companies in general because it has to have very key elements to it that make the worker accept the idea of wearing it,” says Zawaideh. For Levitate, that meant optimizing weight, comfort, size and breathability. As Zawaideh notes, nobody wants to be wearing something hot and sweaty in summer.

“The number one explanation that people provide when they wear the Airframe, or when they see it, is that it’s simple and elegant,” Zawaideh says, adding that the Airframe adds a fraction of the bulk of the EksoFrame used in Ford’s US plants.

“It doesn’t require re-engineering the workstation to make it ergonomically easier on the worker, and because it’s wearable, they get to do what they usually do without interfering in the range of motion or impeding their work.

“It has to be light, it has to be comfortable and it has to be low-profile. Those three things have not been accomplished, at least in our minds, with exoskeletons until the Airframe came out. We made it streamlined enough into their work day that they can wear it and get the benefits from it without making their day longer or making their job harder. That’s the biggest difference between the Airframe and anything else on the market.”

Levitate has big plans for the Airframe, but all are rooted in practicality. Some new additions include high-reach and low-reach versions of the exoskeleton for different working positions, protective coverings to avoid damage when working on luxury cars, and a fire-retardant model for workers who weld.

The surgical exoskeleton has yet to enter production, but the Airframe is already taking the load off employees in 80 companies around the world, combining mechanical strength with human skills.