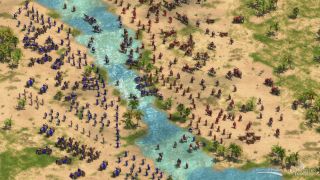 Strategy game fans – real-time (RTS) and turn-based alike – are being served well at E3 2017, namely thanks to the PC Gaming Show.

From a badass-looking XCOM 2 sequel with plenty of cinematic flair to the revival of two classic strategy gems (one of which started it’s life in the “real” world), 2017 will be a fine year for strategy lovers like this very editor.

It’s testament not only to the supremacy of strategy as a game genre to beat all game genres, but to the ever-growing presence of the PC at E3 each consecutive year. So, let’s get right to what games are going to sate strategy lovers this year on PC, all seen at E3 2017.

XCOM 2: War of the Chosen chooses us

The XCOM 2: War of the Chosen reveal is among the most exciting announcements of E3 2017 as it looks to be one of the most intense PC game expansions we’ve seen in a long time.

This looks to be an installment that’s heavier on story than ever before, with plenty of cinematic drama peppered in amongst the turn-based combat.

Next up is not exactly a new announcement, but an exciting game featured at the PC Gaming Show nevertheless. BattleTech is developer Harebrained Schemes’s reimagining or digitizing of the eponymous tabletop, sci-fi war strategy game.

The new game takes an expectedly isometric approach to allow players to manage their mech suits in turn-based combat with all sorts of possibilities and considerations, like suplex-style takedowns and overheating nuclear cores.

BattleTech doesn’t yet have a release date, but is still accepting Kickstarter backers if you want some bonuses with your early buy-in. Learn more about the game right here.

Thirdly, we have the sequel to the critically-acclaimed and commercially successful Total War: Warhammer series getting a release date finally: September 28, 2017.

Announced during the PC Gaming Show, the direct sequel to one of last year’s top PC games introduces new playable factions of the action, like the Lizardmen and the High Elves.

Developer Creative Assembly and publisher Sega capped the announcement off with a new gameplay trailer as well as an exorbitant collector's edition you can find out about right here.

Shown off during PC Gaming Show as well, we originally anticipated this spiritual successor to games like Advance Wars and Fire Emblem on the Nintendo Switch. However, we were reminded of its destiny for the PC as well with a lengthy demo of its incredible level editor tools.

The turn-based, rock-paper-scissors combat system and adorably retro graphics – oh, and online multiplayer – were certainly a help in getting us hyped for this game on PC, too.

Wargroove is due out sometime this year on PC, Xbox One and Nintendo Switch, and you can follow its progress right here.

Age of Empires is reborn on modern PCs

Finally, one of the most revered games in PC history, Age of Empires, is celebrating its 20th anniversary this year. And, guess what, there’s little to no way to play the original release short of CD-ROM.

So, Microsoft and developer Forgotten Empires have teamed up to completely remaster the game from its visuals to its music to its mechanics that all serve to recapture the feeling of playing Age of Empires 20 years ago.

The Age of Empires remake is due out sometime this summer, with a public beta available soon through this link right here.