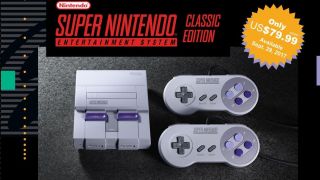 Nintendo plans to absolutely dominate the run-up to Christmas with the long-anticipated announcement of an SNES Classic Edition. This time, however, the company has taken the release up several levels.

As if after our retro-loving hearts, Nintendo has included the never-before-released Star Fox 2 in the tiny box. Naturally, the firm has made a bit of a game of it, locking the game behind the first level of the included Star Fox game.

Better yet, Nintendo promises to include two wired controllers – with hopefully much longer wire – for just 20 dollars more than the previous collectible console at $79 (AU$119.95, about £62) when the device launches on September 29 in the US and September 30 in Australia.

Joining this monumental release of Star Fox 2 are seminal hits like Super Mario World, Final Fantasy 3 and more among a list of 21 classics.

We've not yet heard about exact pricing and launch dates in the UK, but will update this story when we do. In the meantime, just look at these games:

What other features might the SNES Classic Edition offer, and when will pre-orders show up already? What will playing a 20-year-old game, never released in its time, feel like? All we know is that Nintendo all but sealed its holiday lead with a box of games it released 20 years ago. That's a tough power to contend with.