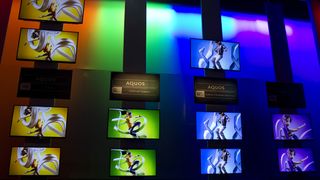 Sharp is getting into the OLED TV business, according to a report from Nikkei Asian Review which says the electronics company is on the cusp of releasing its own range of OLED sets containing LG-made panels.

The Japanese TV brand was the biggest seller of televisions in its home nation in 2018, though the past year saw it slip to third place behind two other Japanese manufacturers: Panasonic and Sony, both of which use OLED panels in their high-end sets.

It's interesting to see Sharp betting on OLED in a bid to reverse that slide, not long after Chinese manufacturer Hisense announced it was ditching the technology in favor of its own proprietary DuelCell LCD panels.

But Sharp isn't the only new OLED player in town, either, with both Xiaomi and Vizio recently announcing their intention to embrace the tech.

The move into OLED could be potentially lucrative, given the growth of the technology worldwide – although Sharp is generally known as a budget manufacturer, and may encounter the same obstacles as other companies if it tries producing these displays too cheaply down the line.

Technically this isn't Sharp's first foray into OLED – it showed off a 30-inch rollable OLED model last year, and various reports over the last couple of years have suggested it was looking to produce conventional OLED sets. But the reliance on LG's larger-scale panels shows a shift in direction.