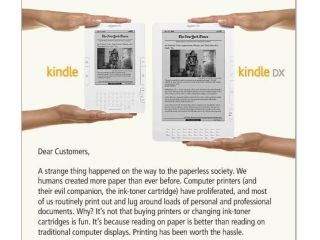 Sony rumoured to be bringing out a large-screen eBook this Christmas to compete with the Amazon DX, coloured screens also on the way in 2010

Rumours are flying around the internet to the effect that Sony is developing a large-screen, colour-screen electronic reader, following the recent announcement of Amazon's new Kindle DX reader.

The news comes from a DigiTimes report that PVI – the company that makes screens for Amazon's new Kindle DX – are claiming that Sony will bring out a large screen eReader to go up against Amazon's Kindle DX by the end of 2009.

The upshot of the rumour, should it prove to be true, is that it might well be worth hanging fire before you head over to New York for a weekend's shopping to get yourself a Kindle DX, as we could well be seeing a large-screen Sony Reader this Christmas.

TechRadar has contacted Sony for a comment on the report. Stay tuned for a 'no comment' coming your way soon.