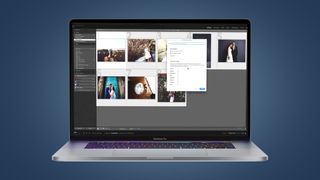 Canon has vowed to step up its photo editing and processing game in 2020, starting with a new Lightroom plug-in called Photo Culling, which will be available to auto-sort your snaps from February.

Powered by Canon's Computer Vision AI engine, the plugin will sit in Lightroom Classic and aim to save you from hours of editing by selecting images for "sharpness, noise, exposure, contrast, closed eyes, and red eyes."

Canon's virtual editing assistant won't just be a law unto itself – you'll be able to customize the settings to make sure it's picking the right kinds of photos. But the main aim is for it to choose by quality, rather than style or content. It'll also flag the photos with different colored flags within Lightroom Classic to make them easier to find.

Naturally, you'll need an Adobe Lightroom Classic subscription to use it, and the app itself will be available exclusively on the Adobe Exchange App Marketplace for a monthly subscription, the price of which Canon hasn't announced yet.

Many photographers use the likes of Photo Mechanic to import photos to Lightroom due to its speedy handling of Raw files, but Canon's Photo Culling app certainly sounds like it has potential for those who want to edit as quickly as possible within Lightroom Classic itself.

Interestingly, it's the start of a big new push from Canon into next-gen editing and processing software. At a pre-briefing event for the 1DX Mark III, Canon Europe's Professional Imaging Product Specialist Mike Burnhill admitted that software "is an area we've neglected in the past" and promised that new Canon Cloud Processing, which will soon be available in Beta with its DPP (Digital Photo Professional) software, is "a vision of where Canon is going" and is "showing how Canon is changing".

Get on my cloud

To back this up, Canon showed us a preview of its new Canon Cloud Processing system for Raw files. The Beta version, which will come with the 1DX Mark III, is basically cloud-based noise reduction – Canon showed us side-by-side images, one showing a photo shot at ISO51,200, and another after it had been automatically processed by its cloud system.

As you'd expect, the processing did indeed bring out more detail and texture in the image. But like its new Photo Culling app, the Canon Cloud Processing is more symbolic than mind-blowing in its current form – the company promised that this was just the "start of that process" towards cloud-based editing and processing.

Given that the company announced in October 2019 that it was closing its Canon Irista cloud photo storage service, it appears the camera company is keener on becoming your photo editing ally rather than the ultimate home for all your precious snaps.