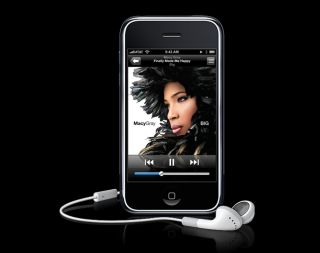 The Apple iPhone goes on sale on Friday 29th June at 6pm, US local time

The long wait for the iPhone launch is almost over. Apple releases its so-called Jesus Phone in the States later today. Unsurprisingly, the web is at fever pitch with facts, rumours, half -truths and rampant speculation. To help you cope with the hype, Tech.co.uk is this week putting together a summary of the best iPhone stories each day, with links to the full text should you wish to further your iPhone fever. Enjoy!

The first screen shots of the Apple iPhone interface have been published by Think Secret , showing what the calendar, email, alarm clock and RSS reader looks like.

The mobile phone industry are eagerly awaiting tonight's release of the Apple iPhone, along with everyone else.

If it is successful, the Apple iPhone could end up changing the way phones and the mobile industry works, says the Associated Press .

The Apple iPhone can handle phone calls, email, internet browsing, music and videos. So far, nothing new - other mobile phones already do all those things. What's unusual with the Apple iPhone is that software is behind all those functions.

Nine alternatives to the iPhone

Not everyone wants, or can afford, the Apple iPhone. There are plenty of Apple iPhone alternatives however, including devices with media players for music, video and streaming content. Many are cheaper than the Apple iPhone too, says Information Week .

Apple's much-anticipated Apple iPhone, which launches in the US later on today, will struggle to reach mainstream audiences due to its lack of 3G connection and a low demand for converged devices, new research published in The Guardian suggests .

Media agency Universal McCann has stated that Apple's goal of selling 10 million Apple iPhones by the end of next year is "too ambitious".

How to best wait in the iPhone queue

There's no need to lose any sleep whilst you're queueing up ahead of the Apple iPhone launch. Bring a bed! That's what one couple to have done, according to Gizmodo who are showing a photo of the couple snuggling up on a huge air mattress.

Should You Buy an iPhone?

This year's burning question: should you or should you not buy an Apple iPhone? If you're not actually in the queue by now, or are prepared to cough up twice its price buying one on eBay, you'll most likely have a few weeks to think about it anyway, as the Apple iPhone is likely to sell out at tomorrow's US launch.

The AP news agency points out that the Apple iPhone will be akin to gold dust when it launches tomorrow. But that demand is likely to go down in a couple of weeks' time - just as it did with the Xbox 360, Sony PlayStation 3 etc.

With thousands of people already queueing up outside Apple Stores ahead of the Apple iPhone launch tomorrow, the company isn't taking any chances.

Apple has called for its first ever sleepover for its staff this evening in order to not leave its retail stores unattended the night before iDay, AppleInsider reports.

In addition to its review yesterday, USA Today has also managed to shoot a clip of the Apple iPhone, its shoebox-shaped packaging, and the contents in its box. The video has been posted on YouTube , AppleInsider reports.

Still no queues outside AT&T in Times Square

The queues outside the flagship Apple Store in New York started two days ago. But even now - the day before launch - it's quite empty outside AT&T's Times Square store, cNet reported .

Steve Jobs to address his minions

Steve Jobs will hold a mini-keynote speech tomorrow morning for all Apple staff ahead of the Apple iPhone launch. Dubbed 'Town Hall', the briefing will be about 'the most revolutionary and exciting product in Apple's history' and Jobs' thoughts on it, according to a memo published by Engadget .