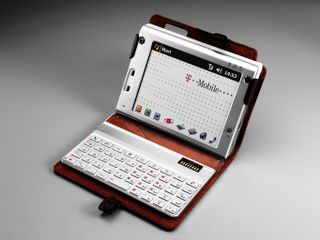 Full specs have yet to be released by T-Mobile although we've learned that it will support Wi-Fi and offer mobile data speeds of up to 1.8Mbps via 3G/HSDPA.

Key features include an Intel Bulverde 624MHz processor and two digital cameras. The main one on the back will be a 3-megapixel version with autofocus and flash. The second - on the front - is for video calling. MicroSD card expansion will also be supported. The Ameo is also expected to include stereo onboard speakers, Bluetooth headphones and a 3.5mm headphone jack.

The phone will also ship with a standard suite of Windows Mobile 5.0 for Pocket PC software, with mobile versions of Microsoft Word, Excel, Outlook, Internet Explorer and Windows Media Player.

The Ameo will released exclusively in the UK as part of T-Mobile's Web'n'walk smartphone range. Prices for the UK have yet been confirmed, although T-Mobile in Germany is quoting 500 euros (approximately £330) for the device on its Relax 100 tariff.

The Ameo is essentially a rebadged version of HTC's Athena, which will shortly be launched under its own brand as the HTC X7500. Phil Lattimore