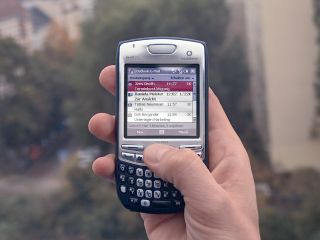 The much-rumoured takeover of Palm by mobile giant Motorola failed to emerge last night as the PDA manufacturer released its third quarter financial results. Speculation of a buyout had been growing, with shareholders coming forward to confirm Motorola as the proposed new parent company.

However Motorola's alleged bid was stymied by severe blood-letting at the top of the company after it said that its third quarter would result in a disastrous $1 billion (£500 million) loss. Motorola announced that it was relieving its chief financial officer, chief operating officer and president of their duties this week.

By contrast Palm reported strong results with turnover of $410.5m (£200m), up from $392.9m (£190m) in its second quarter, largely thanks to increased sales of its Treo handsets. However the company's profits were down $18 million (£9 million) to $12 million compared to the same period last year.