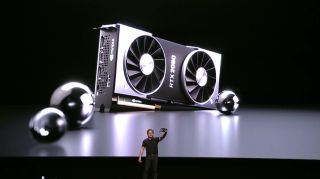 AMD Navi has been getting all of the headlines recently, but it looks like that's coming to an end. Word on the street is that those Nvidia 'Super' graphics cards may be announced as early as June 21.

This all comes from an unverified leak via WccfTech, so we advise taking this with a heavy grain of salt. However, this leak details five 'Super' graphics cards, across the entire Nvidia RTX range.

That means the Nvidia GeForce RTX 2060, RTX 2070, RTX 2070 Ti (which doesn't exist yet), RTX 2080 and even the RTX 2080 Ti are rumored to be getting beefier versions. These Super iterations of the existing graphics cards will apparently be more than the RAM overclock (OC) previously rumored, and everything will shift up a rung.

For instance, the Nvidia GeForce RTX 2080 Ti Super will apparently feature an entirely new graphics processor (GPU), and one that is "not a repurposed Quadro part," according to WccfTech. This card will also be completely unlocked, so that graphics add-in-boards (AIBs) – graphics cards from third parties using AMD or Nvidia GPUs – can really beef up power delivery, according to this rumor.

As for the non-flagship members of the RTX lineup, they will all feature better GPUs, and the 'Super' variants will be priced the same as their non-Super variants, while the existing models will drop in price. For example, the Nvidia GeForce RTX 2070 Super will feature an 'unlocked' but non-OC variant of the RTX 2080 GPU.

We went ahead and listed all of the leaked 'Super' cards below:

The war of the graphics cards begins again

This rumor comes hot on the heels of the AMD Navi announcement, with the Radeon RX 5700 XT and RX 5700 coming right for the Nvidia GeForce RTX 2070 and 2060, respectively. That alone makes this rumor seem a little fishy. Our first instinct would be that they'd be announced at E3 2019, to really ruin AMD's day.

Only time will tell if these rumors are actually true, but if they are, it means Nvidia is ready to take up arms in the battle of AMD vs Nvidia once more, and we can't wait to see how that turns out. In the end, the ultimate winner will be us, the consumers.