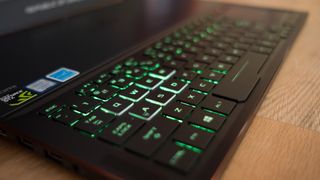 According to a fresh rumor, Nvidia will reveal its GeForce RTX Mobility graphics cards at CES 2019, supposedly on January 6, which would be in the pre-show run-up to the official start of the event (on January 8).

This backs up previous speculation in which we heard that Nvidia was preparing to reveal its Turing GPUs targeted at laptops around CES time.

Wccftech claims that the launch will happen on January 6 – or at least around that timeframe within a couple of days – and that laptops with GeForce RTX graphics cards inside them should be available to buy in February (and possibly even at the end of January).

So we really haven’t got long to wait, assuming this rumor is on the money, and if you were thinking of buying a notebook with graphics performance being a concern, you might want to hold on and see what happens with the fresh products that should (hopefully) be emerging in just a couple of months.

Nvidia is apparently set to unveil the GeForce RTX 2070 Max-Q and vanilla RTX 2070, along with 2060, 2050 Ti and 2050 models which may carry the GTX branding rather than RTX (as lower-end mobile GPUs, relatively speaking – or at least where ray tracing is concerned).

As for the flagship RTX 2080 Max-Q, this could also show up at CES, but equally, its launch could come later down the line, which is what previous speculation contended.

Speaking of that previous chatter from the graphics grapevine, it also mentioned a 2060 Ti GPU, but it seems this won’t be in the mix after all.

As ever, take all this with the usual liberal sprinkling of condiments, but the fact that we’ve heard several rumors now certainly reinforces things – and it makes sense for Nvidia to be on the go with new laptop GPUs at CES.