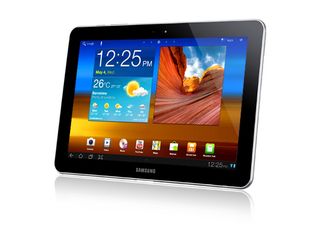 Vodafone has ditched the portly Samsung Galaxy Tab 10.1V, deciding that it makes more sense to sell the slimmer version instead.

Customers who registered their interest in the Vodafone-exclusive 10.1V have been receiving notifications that the network will now be offering the updated model.

But shortly after the slimmer, camera-toting iPad 2 was launched in April, Samsung whipped out a slimmer 8.6mm deep Galaxy Tab 10.1 with a disappointing 3MP camera.

Vodafone had maintained that it would keep its exclusivity on the 10.1V while Samsung would also release the new 10.1 tablet in the UK.

Now it looks as though there'll be but one 10.1-inch Samsung Honeycomb tablet option, although a UK release date is yet to be revealed and rumours of the Android 3.1 update causing problems may mean a bit of a wait.