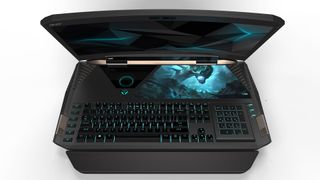 We've seen some impressive gaming laptops in our day, but Acer has easily topped everyone by introducing the first notebook with a curved screen.

Yep, you read that right. A curved-screen laptop.

The Acer Predator 21 X's headlining feature is a curved 21-inch screen that offers an immersive gaming experience on the go. We already considered the 18.4-inch MSI GT80 Titan to be a behemoth, but this 21-inch monster looks practically titanic.

That's no surprise given it also has a built-in mechanical Cherry-MX keyboard with individual RGB lighting for each key. The number pad even has a special feature that allows it to flip over and transform into a Precision Touchpad.

Then there's the immense power hidden behind its thick hide. The Predator 21 X is outfitted with a 7th-generation Intel Core i7 processor and dual Nvidia GTX 1080 graphics cards in SLI. To help cool this beast, the gaming laptop is fitted with five fans and an intricate net of heat pipes.

Other features of this extreme gaming rig include Tobii eye-tracking, which we've seen on other gaming laptops, and a 4.2 channel sound system consisting of four speakers and two subwoofers.

Acer has slated the Predator 21 X for a 2017 release, but it has yet to announce pricing.

Acer also announced a fresh lineup of devices for its Predator gaming series, including updated laptops and monitors.

The 15- and 17-inch Acer Predator gaming laptops have seen the Pascal graphics refresh, and both models are now upgradable to Nvidia GeForce GTX 1070 graphics. The refreshed models will be available in September, and both will come with a starting price of $1,699 (about £1,300, AU$2,260)

In addition to hot new gaming laptops, Acer has also integrated Tobii eye-tracking and G-Sync compatibility into three of its screens seen below.

Stay tuned for our hands-on impressions of this beastly laptop, with a full review to follow.