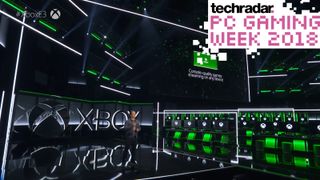 E3 is here once again, and it's a time when console makers try to persuade us to buy their wares. As Microsoft took to the stage, I was willing to be persuaded that the Xbox One would be a worthy addition to my gaming collection.

However, after the conference I was more convinced than ever that there’s no reason to buy an Xbox console when I have a gaming PC. That’s very nice of Microsoft, as it coincides with TechRadar's PC Gaming Week 2018, where we celebrate the PC as the best gaming platform of them all.

However, it’s probably not really what Microsoft had in mind.

Microsoft certainly showed off a lot of games at its E3 event, with third party games like Fallout 76, Shadow of the Tomb Raider and Cyberpunk 2077 all looking excellent, and all, of course, coming to PC.

Microsoft has been getting a lot of flak recently for its rather paltry exclusive lineup for Xbox, and excessively relying on Halo, Forza and Gears of War, but this year it defied critics by showing off… Halo Infinite, Forza Horizon 4 and Gears of War 5.

I’ve never been very interested in these games (the last Halo I played was on a Mac), but if I was interested, it looks like they are all coming to PC anyway. So, no need to buy an Xbox One. Thanks, Microsoft!

The ever-delayed Crackdown 3 also made an appearance, and while more Terry Crews in my life is always welcome, I just can’t get that excited about it. If Microsoft does show enough to prove that it was worth the wait, well, I can always buy it on PC.

But, it still means they are missing out on selling me expensive Xbox hardware. Thankfully, online gaming remains free on PC, so it doesn’t get to flog an Xbox Live subscription either.

And, exclusives do matter. The PS4 is the only place I can play God of War, Detroit: Become Human, Uncharted 4 and The Last of Us 2, which is why I have one. And that’s not about paying to prevent games from appearing on other platforms, it’s about creating new games and nurturing game developers to make games that fully take advantage of the platform they are on.

Microsoft did announce that it has bought a whopping five developers to create exclusive games, which is a big step in the right direction, but if those games are any good and come out on PC as well, then there’s still no reason for me to buy an Xbox.

I’m not complaining. With Microsoft releasing pretty much every Xbox game on PC, it means I have some excellent games to look forward to – without having to buy an Xbox.

It just seems a little odd that it’s so keen on making the Xbox One appear obsolete when it comes to PC gamers. Maybe there is a little truth in the rumor that Microsoft will one day stop making consoles, and instead make Xbox a platform that can be played on consoles and gaming PCs.

Considering the struggles the Xbox One is having against the PS4 and Nintendo Switch, that may not be such a bad idea.