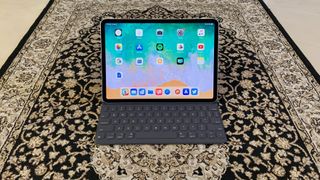 We tend to classify usage of our devices between two categories - content creation and content consumption. However, computing has evolved over the past few years, and while we continue creating and consuming content, we also spend a fair amount of time modifying it. This isn’t a new type of work - editors for example, have been taking work created by writers and modifying it to suit the publication they work for.

The iPad has traditionally been looked at as a content consumption device - great for browsing the web and watching videos. There are exceptions such as the music or sketching industry where the iPad is used to create phenomenal content. But for most of us, the iPad is better at consuming content than creating it. However, the new iPad 2018 is also great at content modification - something many of us do on a daily basis.

Apple was kind enough to loan me the new 11-inch iPad Pro for a few weeks along with the Apple Pencil. This is the top-of-the-line model with 1TB of storage and LTE connectivity. To make things a bit easier to use, I personally bought the Apple folio keyboard cover to use with this iPad.

This isn’t a review of the iPad Pro - Gareth Beavis has already done a fantastic job writing one up. Rather, this is a write-up of my usage of the iPad over a couple of weeks.

I have previously tried replacing my MacBook Pro with an iPad when the original 12.9-inch iPad was released but I ended up going back to the laptop for the flexibility it offered. I was pretty sure that the latest iPad Pro, at least with iOS 12, still wouldn't replace my laptop full time but I wanted to see how far along it had come.

As with the last generation of iPad Pro, the 2018 model of the iPad Pro is released in two sizes. The smaller 10.5-inch iPad Pro is now an 11-inch version and the larger 12.9-inch version has the same screen size but comes in a smaller form factor. I definitely prefer the smaller one because of its light weight and size that’s more wieldly in one hand.

As you’d expect, the build quality is top notch, though the new iPad looks a bit generic now without the home button. My daughter thought it was a “tablet” and not an iPad which just goes to show how much weight Apple has in the tablet category - it’s either an iPad or just another tablet.

Defining work - most of it happens on the web

My workflow is divided between my Mac at the office, my MacBook Pro, and my mobile phone which I keep rotating between an iPhone and an Android phone. For many, the iPad is their one and only computer - my wife uses one as such. But her usage differs considerably from mine. I do a LOT of different things on my computer - from email, messaging and web apps to editing photos and videos and working through documents and spreadsheets. At any time, I have multiple apps open and switch between them frequently.

On my Mac the most time is spent inside the Chrome browser. That’s how I access our CMS to edit articles, check my work email, create docs on GSuite, use Xero for company accounting and look at web analytics for daily usage. There’s tons more that I use Chrome for such as reading news websites, using Slack, Tweetdeck, WhatsApp, as well as Salesforce.

The iPad doesn’t have a desktop-class browser, so what you get is mobile Safari which, IMHO, is it’s biggest weakness. Google Chrome is available for the iPad but, because of Apple's restrictions on iOS, it can't use its own rendering engine and has to stick to Apple's Webkit which pretty much makes it as impractical as mobile Safari.

That being said, there are iOS apps available for most web apps I use such as Xero, Salesforce and GSuite. Some of these apps don’t offer as comprehensive of a functionality as their web apps but are good enough to be used for most things.

A big part of work is communication, and we’ve been using Slack for a long time for internal team chats. The iPad app for Slack works really well for everything I do during a normal workday. Besides Slack, I also use Google Hangouts at times for video conferencing and the iPad is equally good for that.

Where the iPad failed me was with WhatsApp which is the default chat client for a billion users and is extremely popular in the Middle East for personal as well as work communications. There is no iPad client for WhatsApp and it doesn’t work using mobile Safari either so I’d have to manually pick my phone every time I got a message.

Besides using Chrome for everything I mentioned above, there are other apps that I use on the Mac on a daily basis. One of them is for accessing my RSS feeds, which helps me stay up to date in the rapidly changing work of tech. This is one area where the iPad provides a better experience than the Mac because of its touch screen.

The app I use on my desktop is Reeder which is quite nice, but the one on my iPhone is Newsify which is also optimized for the iPad. It’s much more easier and visually appealing to browse through items on the iPad and catch up on the headlines.

I also use a password manager and my preferred option is 1Password which works equally well on the Mac as it does on the iPad, iPhone and Android. In fact, using 1Password on the iPad is a better experience than Mac because FaceID makes it much faster to authenticate.

While we use GSuite at work for documents and spreadsheets, there really is no way of getting around Microsoft Office - I get tons on attachments as Word, Excel or Powerpoint files. Microsoft makes good iPad apps for all of them and while I did face moments of frustration, especially when editing a Powerpoint presentation, it wasn't something I couldn't overcome.

I'm not a professional photo editor but I do need to work on photos for reviews and articles. Most of my edits require cropping and resizing photos, changing colour levels and adding text layers. Using Pixelmator on the iPad allows me to do all of that and while I’m more comfortable using a Mac for this, it’s purely because I’ve been using a keyboard and mouse for decades.

If you like to do more than just edit images and actually create artwork, the Apple Pencil can be quite an amazing tool. Almost everyone I’ve met that has used a Wacom tablet for drawing on their computer has preferred working on the iPad Pro with Apple Pencil.

Along with photos, I also work on Final Cut Pro for editing short videos, mostly for our Instagram channel with unboxing videos and such. Again, my workflow isn’t massively complicated but I do work with separate audio and video files which are imported from SD cards from cameras and voice recorders.

While the iPad can import video files into the Photos app, it doesn’t see audio files from an SD card. This highlights the lack of a truly accessible file system on the iPad. I complained about this before when looking at the 12.9-inch iPad Pro a couple of years back and unfortunately, not much has changed since then.

To me, this was where I felt most restricted using an iPad. There are a couple of video editing tools available on the iPad such as iMovie which I found too basic. While Adobe has released Premiere Rush on the iPad, I haven’t played with it much, so for me it was unfortunate that I couldn't harness the power of Final Cut Pro on the iPad.

Let’s get one thing out of the way - the iPad is a fully functional computer for most people. I tend to use my computer for more things than the average person and I’ve been using PCs/Macs for decades. Despite this, I can almost see myself using this new iPad as my primary computer.

It’s better than the Mac at many things - I prefer the iPad for staying up to date with my RSS feeds or using Slack, as well as conferencing. FaceID is also so much faster to unlock my iPad versus TouchID on my 2015 MacBook Pro. And LTE connectivity lets me stay connected in and out of the office no matter where I go.

Where the iPad is still behind is with photo or video editing, and I see no reason why it can’t match up to the Mac, especially considering how crazy fast the performance is and how gorgeous it’s 120Hz screen is.

The way I see it, there are a three areas that Apple needs to work on to make the iPad truly shine:

1) Better access to the file system. I can understand that Apple doesn’t want users sticking random USB drives on the iPad now that there is a USB port on the iPad. But there are ways Apple could allow opening specific file types- such as in the Files app on iOS, or making apps go through a secondary verification process to open specific file types.

2) Have a desktop version of Safari instead of mobile Safari. This will allow most web apps such as WhatsApp to run on the iPad even if there is no iPad specific app for it.

3) Build support for a mouse/trackpad, which will tremendously help with apps that need precision such as photo and video editing apps. Apple already supports Pencil which allows a certain amount of precision work but there are certain apps and tasks that just work better with a pointing device.

I have no reason to believe that we won’t see some of this in iOS 13. In fact, the iPad Pro is the biggest reason I’m excited about the next version of the iOS. Apple has pushed the limits of hardware with this new iPad and it needs to give it the software it deserves.