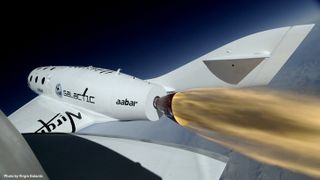 Space is Google's next frontier

Google is looking to augment its growing interest in the realm of space by saddling up with Virgin Galactic, according to reports on Thursday.

Sky News sources claim the firm has agreed to become a part shareholder in Richard Branson's commercial space firm with an initial investment of £17.8m (around $30m, AU$31.8bn).

Google's interest in Virgin Galactic is no doubt part of its desire to boost internet connectivity around the world. Just last week the firm spent half a billion dollars to acquire satellite firm Skybox.

A stake in Virgin could give Google a unique opportunity to get these internet-carrying devices into low-earth orbit.

The report says the two firm's have been in talks for months over the arrangement, which could give Google a 1.5 per cent stake in the company, which is valued at £1.2bn (around $2bn, AU$2.12bn).

So far, neither company has commented on the report.