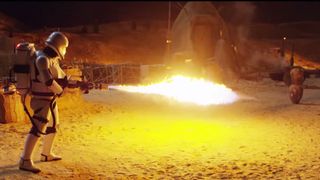 A new reel for Star Wars: The Force Awakens premiered at Comic-Con 2015 on Friday, and it offers a different look of the forthcoming film than what we've seen before.

The 3:42-long clip takes viewers behind the scenes into the making of Episode 7, and it's a ride. There are Storm Troopers with flamethrowers, gorgeous sets, high-flying stunts and, perhaps best of all, moments with the actors, including Simon Pegg (who appears to be playing an alien), Mark Hamill, Carrie Fisher and Harrison Ford. The latter two actors are in full costume (are those hair buns we spot, Leia?).

For this Star Wars, "practical effects" are the name of the game, not the CGI that many fans lampooned in the prequels. Between the balls of fire and airborne Troopers, we say the movie's effects feel very real.

You can watch the full behind-the-scenes clip below: