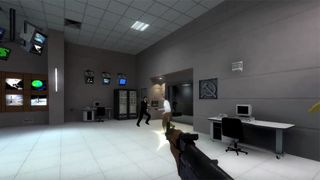 GoldenEye: Source is free to play on Windows.

It's fair to say GoldenEye 007 for the N64 set a new standard in first-person shooters and the game still has a strong following almost 20 years after its initial launch. Some of those fans have proved their dedication by releasing a fully updated version for Windows.

Unlike the original, GoldenEye: Source is multiplayer only, but you get 25 maps to explore, 10 game modes to try, and all 28 weapons from the 1997 classic to play around with. It'll all run on a pretty modest PC setup too.

It's the perfect way to take a nostalgic trip back in time to the days when Pierce Brosnan was the brand new Bond, Bill Clinton ruled the United States and Barbie Girl was dominating the pop charts.

We've seen parts of GoldenEye recreated in the Unreal 4 engine before but nothing on this scale. Based on the gameplay trailer you can see above, the team of volunteers behind the project have stayed as faithful as possible to the original.

The game has actually been available in different stages of development for a decade, but version 5.0 is the first major update in three years and the most polished release yet.

So what are the chances of a genuine GoldenEye 007 update from publisher Rare? It was two years ago that studio head Craig Duncan told us there was still the possibility of a new version appearing, but we won't be holding our breath.