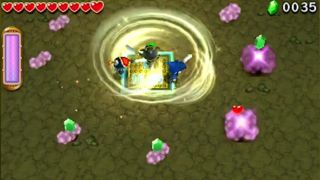 The new handheld title looks to be a three player co-op game, in which you can explore dungeons and solve puzzles with online friends. Triforce Heroes also introduces a new Totem mechanic that let's gamers literally stack heroes on top of each other to create a small tower. From this elevated perch, players can hit switches higher up while smacking tall enemies in the face.

Zelda Director Hiromasa Shikata explained players can also dress their characters in Zelda: Triforce Heroes. By collecting items, users can create their own outfits for a unique looks and new abilities.

In the gameplay trailer we can see one player pulling off Link's iconic Spin Attack with wearing a one outfit. Additionally, the trailer also reveals Lucky Loungewear, a Big Bomb Outfit and, yes, a Zelda dress.

When playing alone, Link will be joined by doll-like characters. Players can assume control over these two helpers to activate switches and solve puzzles. Like Zelda: A Link Between Worlds before it, Triforce Heroes adopts a cartoonish style evocative of the Super Nintendo game, A Link to the Past.

The Legend of Zelda: Triforce Heroes comes to the Nintendo 3DS in Fall 2015.

On top of a new Zelda title for the 3DS, Nintendo also revealed a new Metroid game of sorts.

Rather than featuring the famed bounty hunter herself, Metroid: Federation Force is a co-operative multiplayer game. Players will join up in four man teams to take on massive enemies like Goliath Beetles and Base Trooper.