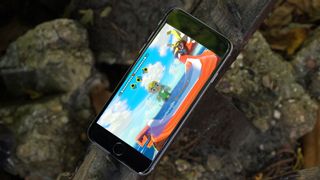 Nintendo has announced it is to put its name to mobile phone games. This is something that has been talked about for years, after people started playing more on iPhones than Nintendo 3DSs, especially in the west.

But what sort of games will Nintendo make for mobile devices? Are we months off playing Super Mario 64 on our new Galaxy S6s?

No place for ports

Well, no. And by the looks of it, much of the games' development will not be done by Nintendo but another company, DeNA, which has teamed-up with Nintendo to create mobile games. Here's the mission statement as per Nintendo's announcement:

DeNA went into a little more detail in its own announcement, saying that the games would be entirely new projects "rather than porting games created specifically for the Wii U home console or the Nintendo 3DS portable system."

Dispel any visions of waves of existing Nintendo games suddenly spilling onto Android phones and iPhones. In short, Nintendo isn't that stupid. It knows that the virtually mandatory freemium/low price mobile model would instantly devalue its console/handheld properties.

Zelda on your phone?

However, there was an interesting little excerpt from the DeNA statement we should take notice of: "all Nintendo IP will be eligible for development and exploration by the alliance." No brands are off limits. Not Mario, not Zelda.

Still, it's certainly no guarantee we'll see archetypal games of these brands on mobile, and Nintendo is likely to be very strict about approving any mobile games that feature Zelda and Mario IP.

They're just too important for other areas of its business. Older gamers may remember when Nintendo loosened its grip back in the 90s, resulting in the outright Philips CD-i FMV turd The Legend of Zelda: Wand of Gamelon (among others).

To get a clearer idea about the sorts of games that will result from this partnership, we need to make some suppositions about how the partnership will operate. You may not have heard of DeNA, but you may have encountered two of its arms, Mobage and ngmoco.

Mobile gaming veterans may feel a warm glow at the mention of ngmoco, which made some of the best early iPhone games, like Rolando and Star Defense, but it's Mobage that is the most important element here. As well as a developer/publisher, Mobage is a gaming platform used predominantly in Japan, a system used to flog DeNA's games alongside Google Play and the iPhone App Store. In the past it has attracted upwards of 30 million active users.

The creation of a Nintendo network like this is the most important part in Nintendo's eyes, it seems:

Nintendo is after some of the social-powered success DeNA has achieved, and is not happy to just make do with the infrastructure of the Apple Store and Google Play.

During the press conference where this deal was announced, Nintendo President Satoru Iwata admitted as much:

"The fact is, however, [mobile] is a highly competitive market and only a handful of content providers have been able to show enduring results. If Nintendo cannot make it to that handful of winners, it does not make sense for us to be engaged in the software business on smart devices."

If the Mobage platform is Nintendo's inspiration for this deal, it seems that — as many of you may have dreaded — freemium is the model Nintendo will focus on. All of Mobage's greatest successes are free-to-play. Examples include Rage of Bahamut and Blood Brothers.

This is not the first time DeNA has made a deal with a holder of immensely important IP. In 2012, DeNA struck a similar deal with Disney, and aside from the Nintendo deal's increased focus on creating a (what sounds like) closed platform from which games can be distributed, alongside the phone app stores, it gives us an idea of how Nintendo mobile games might be made.

Star Wars is a Disney property nowadays, and the most recent mobile game made based on it is Star Wars: Galactic Defense. It was developed by DeNA Santiago, and handily the studio has created a developer diary that explains a little about the game's creation.

Despite all the positivity of the video, it appears to be a Star Wars re-skin of the popular tower defence title Kingdom Rush (stylistically) with far greater use of micro-transactions and social elements, in an effort to encourage player loyalty. It's a strategic game, in the sense that its design has been strategically put together to have the best chance of floating in the mobile space. Smart or cynical? It depends on where you stand.

Is this what is in store for Nintendo's mobile game future? Note Nintendo did not also announce a new mobile game development division, suggesting that its mobile games may be developed in much the same way: DeNA and its subsidiaries do the legwork while Nintendo checks for brand compliance and quality.

Nintendo is effectively handing over the game design reins because DeNA has much more experience in this area. Nintendo has failed to deal with the way mobile gaming has evolved in the last six years, where DeNA is a native.

Of course, at this point we don't know about how involved Nintendo will be in the game design plans for its mobile games. Anything is possible, and its not hard to imagine Nintendo being more than a little precious about its brands.

But what DeNA has done with Disney's IP suggests we're looking at pretty conventional mobile fodder where micro-transaction returns are as important to the design as game mechanics. Fine-tuning mobile transactions within games is an art, and getting that right is what separates the "handful of winners" Iwata identifies from the also-rans.

You can see this in the wording of the announcement from both Iwata and DeNA: both say they will "develop and operate" mobile applications. Mobile games aren't a product anymore, but a service.

That Nintendo is self-consciously wise to this idea tells you a lot about what to expect from Nintendo mobile games in 2015. We only hope that DeNA and Nintendo discover a mobile gaming framework that works for gamers, the money men and the brands alike. It's not an easy task.