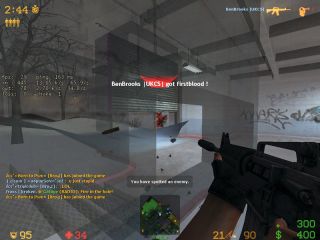 Cheating can, of course, be a good thing. We've all entered cheat codes into games to unlock special modes, to obtain weapons, to give ourselves infinite ammo, or extra lives.

The reason those cheat codes exist is that the developers knew their prospective players would want the option to play the game in those ways: to skip levels and open up options.

This kind of cheating isn't really cheating at all, it's more like an admission by the game designers that the rules they've made might as well be bent, and even formalised with specific keys to unlock them as the player sees fit. They're an extension to the original game.

But cheating, in the strictest sense, means not playing by the rules of a game, and benefiting from your actions as a result. There are several cases where cheating isn't simply a cheeky secret hidden inside the game, but an outright violation of the way we expect games to be played.

The most famous of these cheats are probably 'hacks' and 'bots', in which games are either rewritten by players for their own ends, or are played out by computer programs to the benefit of the player who uses them.

In the course of this article we'll look at both of these phenomena, and see how the people who run games and their communities have attempted to deal the problem cheating presents.

However, there are a couple of other aspects to cheating which aren't usually mentioned, and I'd like to touch on those here too.

The first is the situation which arises when a single player game allows the computer side to 'cheat', because it can't rely on AI to challenge a human player.

The other is when developers themselves manipulate their own games, to give themselves an unfair advantage in play. When multiplayer games are a social phenomenon, and a kind of pact between developer and player, who really gets to make the rules? We'll be finding out.

The lead designer of Civilization 4, Soren Johnson, blogged about the very specific problems that designers face when making single-player games a fair challenge for players.

"Under symmetrical conditions," he wrote, "artificial intelligence often needs to cheat just to be able to compete with the player. Accordingly, designers must learn what cheats feel fair to a player and what cheats do not. As the Puzzle Quest team knows, games need to avoid situations in which players even suspect that the game is cheating on them."

Puzzle Quest, as Johnson points out, is easily accused of cheating, because the computer could easily 'know' what the next line of puzzle jewels was going to be, just as it might know that the next shape would be in competitive Tetris. This made cheating by the computer a possibility – even a distinct probability – in the minds of many players, to the detriment of the player experience.

Another example might be the recently released Red Faction Guerilla – a third-person action game with a wide-open Martian world – in which the game spawns enemies just out of sight,, which then run in to attack the player. This means an empty building, cleared of enemies seconds ago, can contain opponents again just moments later.

Until you notice this happening – which everyone eventually does – you think you're just up against waves of reinforcements. But the illusion does not and cannot last, because these enemies appear even when it's 'unfair' or illogical for them to do so. A brilliant game, one of the best of the year, but it still feels like it's cheating.

Johnson points out how frustrating this can be for players, but it's not something that game designers can necessarily avoid. If games are going to be suitably balanced for players to face a challenge, while still being allowed to win, then such artificial system must be in place.

Johnson's example is that of racing games, where computer controlled cars slow down or speed up their pace relative to the player to create a fun experience. If the computer cars drove realistically then one mistake would pretty much put the player out of the race, every time. This would not be entertaining, and most people would not enjoy racing games.

It's notable that the racing games which do not include such concessions to the player are seen as extremely hardcore, and appeal only to limited audiences. Cheating, here, is a good thing.

Of course, what matters is how the player perceives that artificiality. If done subtly, then it's not a problem – such as waves of enemies in FPS games arriving from places where it makes sense for them to appear, or races in which you're constantly struggling to overtake, and don't see the cars slowing down to let you cross the line.

Necessary cheating in a single player game comes about where the competition is asymmetrical between player and PC, and the final judgement is always made on whether the player is able to win, and enjoy doing so.