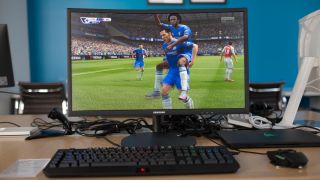 Samsung is seriously getting into gaming with a pair of curved CFG70 monitors designed to keep up with competitive multiplayer.

Available in 24- and 27-inch screen sizes, the Samsung CFG70 gaming monitors promise to deliver silky smooth full HD gaming with 1ms response time. A Samsung rep also explained how the monitor is programmed to refresh the picture by dividing up the display into quarters, whereas most gaming monitors refresh globally.

To help reduce flickering, the display also incorporates AMD's FreeSync technology to ensure the screen refresh rate is synchronized up to 144Hz.

Samsung has also brought along the same Quantum Dot technology that powers its Super Ultra High-Definition TVs to the CFG70-series. This grants the gaming monitors the ability to display 125% of the sRGB spectrum while bringing greater depth to blacks and colors.

Beyond an impressive display panel, Samsung wants to set itself apart from other gaming monitors with a unique display stand.

Rather utilizing a traditional slide-and-lock stand, the CFG70 has a ball-and-joint mechanism that allows the neck to seamlessly tilt, adjust height, rotate, and pivot, all without moving the base. It's was surprisingly thin and sturdy, and it felt less jerky when adjusting the screen in our short hands on time with the monitors.

The CFG70 also incorporates interactive LED "Arena Lighting" to provide a richer gaming experience by pulsing with the action.

On top of a new pair of gaming monitors, Samsung has announced its most curved display yet with the 34-inch CF791.

With a curvature rating of 1,500R and a 21:9 aspect ratio, Samsung claims it's the curviest screen in the world, which translates to an even more immersive picture that truly wraps around your entire field of view.

And it's quite a picture to behold thanks to its 3,440 x 1,440 resolution and Samsung's Quantum Dot technology. We only saw the monitor in a short preview, but we definitely have to say it's one of the prettiest displays we've ever seen with sharp detail, vibrant colors and plenty of contrast to boot.

A few additional features built-in USB dock with two ports and dual 7-watt speakers. The only potential downside we see is the 4ms response rate might not make it the best display to use for gaming.