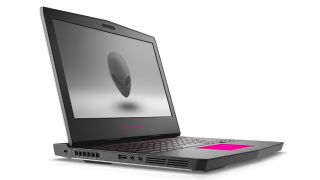 So you want a VR-capable gaming notebook, but you also want a nicely portable device? Then Alienware’s new 13-inch laptop kitted out with Pascal graphics – and an optional OLED screen – is going to be of interest.

The first VR-ready notebook ever to be made at this size, the Alienware 13 starts at $1,199 (around £980, AU$1,560) and manages to pack in a quad-core Intel Core i7 H-Series CPU, with ‘dynamic overclocking’ tech to juice it up further, partnered with a GTX 10-series GPU.

Alienware promises that this is plentiful power for virtual reality gaming, and indeed the new laptop boasts no less than five times the graphics performance at 4K resolution compared to the previous Alienware 13.

The refreshed gaming notebook benefits from a new design with a considerable number of advantages, including a thinner profile, more durable chassis (which uses anodized aluminum and magnesium alloy), and improved cooling which is obviously necessary to ensure that this compact effort doesn’t overheat mid-battle.

The engineers have also managed to fit a bigger battery in, making the move from a 51 watt-hour power pack in the previous model to a 76 watt-hour battery here.

And if you want something special on the display front, it’s possible to specify a QHD (2560 x 1440) OLED screen with a 1ms response time (and it’s touch-enabled). This is the first gaming notebook to get OLED with its vivid colors and inky blacks, although you do have other (less expensive) choices: a basic TN panel (HD resolution), or an IPS screen with a Full HD resolution.

Other points of interest include an infrared camera which supports Windows Hello for logins via facial recognition, and a new TactX keyboard which promises a quality typing and gaming experience complete with RGB LEDs.

While you’re here, you might also want to check out our hands-on with the new Alienware 17.