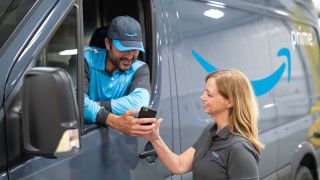 Amazon's empire is so vast, it's managed to turn an annual sale into a semi-official holiday. Amazon Prime Day has grown into a 36-hour celebration of shopping, with customers glued to phones and computers in hopes of snapping up a bargain, but it still can't compete with the international retail extravaganza that is Black Friday.

Well, that said, Bezos' brand is one of the biggest players during the November buying frenzy - the Amazon Black Friday deals are already rolling in earlier than many might expect.

Amazon Prime Day began in 2015, giving customers a reason to crack open their wallets in the middle of the year, and pushing them to give Amazon Prime a try.

However, you don't need Prime to benefit from Black Friday bargains and free delivery; deals are available to everyone, and Amazon has announced that it's waiving shipping fees in the US from 5 November until Christmas.

Another key difference between Black Friday and Amazon Prime Day is the number of retailers taking part.

Other retailers have hopped onto the coat tails of Prime Day (like Ebuyer with its cheekily named Optimus Day) and a few others promise to price-match special discounts throughout the year, but Prime Day is still pretty much an Amazon-only affair.

Prime Day is also more limited geographically. Black Friday began in the US, with stores slashing prices to lure in customers the day after Thanksgiving, and its popularity has seen retailers around the world follow suit.

By contrast, Prime Day is a somewhat more localized affair. This was the first year Amazon offered special discounts to subscribers in Australia, Singapore, the Netherlands and Luxembourg), but it doesn't yet have the worldwide reach of Black Friday.

Interestingly, though, Black Friday is known as White Friday in the UAE - a name taken from the Amazon-owned souq.com.

Then there's the duration. Amazon is stretching the definition of 'day' to the limit with a Prime Day lasting 36 hours, but Black Friday is even more of a temporal anomaly, stretching from midnight on the Friday to 23:59 the following Monday.

Some retailers stretch the occasion even further, offering discounts for an entire week or longer, allowing you to scoop up the deals without worrying about getting caught in a browser-refreshing mania.

Amazon itself is plunging into Black Friday particularly early, and has given us a sneak peek of some of the best deals on its own tech that we can expect to see in the run-up to Black Friday.

Its Echo speakers, Kindle Fire tablets and  Echo smart plugs will all be discounted throughout November.

We'll be hunting down all the very best deals on tech throughout the entire Black Friday period, so keep an eye on TechRadar's best Black Friday deals to make sure you never miss a bargain on something you really want.