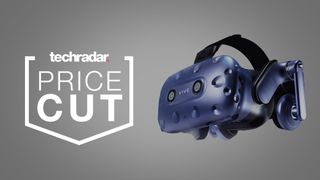 If you've been shopping for an HTC Vive deal recently, you'll know the $1,099 Pro price tag well. That all changes today with this price cut taking the Pro starter kit down to just $799 for the seasonal sales - that's the cheapest we've seen the kit yet, making high-end virtual reality possible for many more.

The HTC Vive has long been held as the pinnacle of powerful virtual reality, with an elite set of specs and the price tag to match. Whether you're looking at the gamer-oriented version or the more powerful Pro model, you know you're taking home the cutting edge in VR development. The high-resolution headset features AMOLED screens enhanced with 3D spatial audio that engages active noise cancellation when you're in VR but can clip back to your surroundings when needed.

The headset itself has also been developed to offer above-average comfort, with evenly distributed weight and a balanced center of gravity as well as face cushioning. Thanks to SteamVR tracking, the Pro model is capable of amazing room-scale experiences, with headset and controller tracking working together to produce a 360-degree play area.

This HTC Vive deal saves you an amazing $300 on the high-end kit, making now the best time to take the leap into virtual reality. Included in the headset are two controllers, two base stations, a link box, and the Vive Pro headset, as well as a six-month VIVEPORT Infinity membership. Just make sure your PC meets the minimum requirements, as a standard GTX 1050 graphics card won't make the cut.

HTC Vive Cosmos | $599 at Walmart
This HTC Vive deal is $200 cheaper than the Pro starter kit and offers a slightly more conservative setup. You're getting LCD displays rather than AMOLED, with a more stripped back set of specs inside. That said, this is still a high-end virtual reality with a great price tag this week. Plus, you're getting six months of Viveport Infinity worth $80 to keep the savings rolling. You will still need to check you've got a PC that can handle it though.
View Deal

If you don't have the gaming PC to run the HTC Vive, you'll be happy to know we're seeing more cheap gaming laptop deals that offer the specifications necessary. If you're still priced out, you can always check our best Oculus Rift deals to find the headset for you. If you're a PS4 player, these PlayStation VR prices may be more inviting.