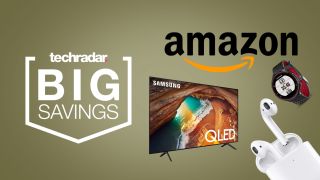 If you're looking to save some money with an AirPods, laptop or 4K TV deal this weekend you're in luck. Amazon has further discounted a range of computers, TVs, headphones, game consoles, and smartwatches just in time for the weekend, with other sales holding fast as well. We're seeing some fantastic fitness tracker deals in particular, with Garmin leading the charge against some late-addition Fitbit sales. Plus, Amazon's range of smart home products are still holding onto their holiday sales price tag right now.

We've listed all our favorite Amazon sales right here for you to peruse, with our top picks sitting right at the top.

Fitbit Alta HR: $69.84 at Amazon
You can get the best-selling Fitbit Alta HR on sale for $69 at Amazon. The ultra-slim activity tracker offers continuous heart rate monitoring and tracks steps, distance and calories burned.
View Deal

Garmin Forerunner 35 | $99.99 at Amazon
This easy to use fitness tracker is perfect if you're just starting to monitor your exercise from your watch. You're getting 24/7 heart rate monitoring, notifications, and exercise prompts on a high resolution display and it's all $50 off at Amazon.
View Deal

Garmin Instinct | $199.99 at Amazon
If you're after a fitness tracker deal more suited to the great outdoors, then this Garmin Instinct has military-grade resistance to thermal, shock and water pressures. You also have access to three global navigational systems and all the fitness and heart tracking you'll desire.
View Deal

Garmin Fenix 5X | $359.96 at Amazon
The luxurious Garmin Fenix 5X is down to just $359 at the moment at Amazon, meaning you can pick up the feature-loaded multi-sport watch for over $100 less. Stacked with outdoor navigation features, tracking and stat notifications during your workouts, and dozens of connected features, this is a fitness tracker for the serious.
View Deal

Apple AirPods with charging case | $128.99 at Amazon
The standard second generation of Apple Airpods are still on sale at Amazon for just $128. We only saw these available for a little less than this price over Black Friday so if you missed out over the deals season, it's never too late to bag a bargain.
View Deal

Beats Powerbeats Pro | $199.95 at Amazon
Start 2020 right with these Powerbeats Pro earbuds - perfect for fitness and AirPods' biggest competitor now reduced back down to under $200.
View Deal

Beats Solo 3 Wireless Headphones: $195 at Amazon
The Beats Solo 3 headphones get a $100 price cut at Amazon. The best-selling wireless headphones provide up to 40 hours of battery life and work with Siri for hands-free control.
View Deal

iPad (2019) WiFi 128GB | $379 at Amazon
This is the latest flagship iPad to hit store shelves. You're getting support for all the latest peripherals in this exceedingly cheap iPad deal today, plus a nice price drop at Amazon.128GB is more than enough for storing your entertainment and documents as well as a few high-performance apps to boot.
View Deal

Apple iPad Air | 10.5-inch | 64GB | $459 at Amazon
The iPad Air takes all the best bits of the classic iPad experience and offers a new lightweight model to get it done with. This is the 64GB model and the cheapest configuration you'll find in iPad deals this week.
View Deal

Apple iPad Pro | 11-inch | 256GB | WiFi | $899.99 at Amazon
If you're looking for more storage space, you might want to consider this iPad Pro deal and save $50. You'll be able to store a good few high-performance apps as well as a fair number of HD downloads with 256GB.
View Deal

Acer Chromebook 11 N7 | $149.99 at Amazon
Save $50 on the 14.6-inch Acer Chromebook with Amazon this week. A nifty little computer, you'll get up to 12 hours of battery life out of this durable laptop with 4GB of RAM, and 32GB of storage. If you're concerned about future updates, Chrome OS means you don't have to worry about that smaller storage size getting in the way.
View Deal

Lenovo Ideapad 330S 15.6-inch laptop | $475 at Amazon
This 330S Lenovo Ideapad model only has 4GB of RAM listed, but you're also getting 16GB of Intel Optane memory to balance the books on that spec. The Optane memory acts as a streamlined buffer between your hard drive and CPU, making read and write speeds incredibly fast. If you're after big storage, this 1TB hard drive will do the trick, and while there's no SSD to speak of, you're getting efficient power thanks to that Optane memory. There's also a nice quad-core 8th generation i5 processor to keep everything ticking over.
View Deal

Asus VivoBook 15-inch gaming laptop | $479.99 at Amazon
You're getting a quad-core AMD R5 processor with 8GB RAM and a 256GB SSD inside this sleek, thin shell. You'll also be running Radeon Vega 8 graphics so there's plenty of reason to get some gaming in there as well.

Acer Aspire 5 | $487 at Amazon
Equipped with an 8th-generation Intel Core i5 processor, 8GB of RAM and a 256GB SSD, the Acer Aspire 5 is already a budget champion. Save an extra $42 on this Amazon laptop deal today.View Deal

Lenovo Ideapad 330S 15.6-inch laptop | $475 at Amazon
This 330S Lenovo Ideapad model only has 4GB of RAM listed, but you're also getting 16GB of Intel Optane memory to balance the books on that spec. If you're after big storage, this 1TB hard drive will do the trick, and while there's no SSD to speak of, you're getting efficient power thanks to that Optane memory. There's also a nice quad-core 8th generation i5 processor to keep everything ticking over.
View Deal

Surface Pro X | 13-inch | 128GB SSD | 8GB RAM | $899.99 at Amazon
One of the smallest specs running on the Surface Pro X but by no means a weak configuration, this 128GB SSD, 8GB RAM combo offers plenty of room for multitasking and running some high-performance programs on your new tablet. This is also the 4G and WiFi model, meaning you can take your web browsing on the go without relying on public internet connections.
View Deal

Surface Pro 7 | 12.3-inch | 256GB SSD | 8GB RAM | $999.99 at Amazon
This mid-range Surface Pro 7 offers 8GB of RAM with the same 10th generation i5 processor but a boost up to 256GB in SSD storage space. That's fantastic for a sub-$1,000 price tag, and offers a great spec for multi-tasking between some fairly high-performance apps and programs.
View Deal

PS4, Xbox One, and PC gaming peripheral deals storm ahead

PS4 Slim 1TB | God of War, The Last of Us: Remastered, Horizon Zero Dawn: Complete Edition | $243.99 at Amazon
Pick up a massive 1TB PS4 Slim deal for $50 less than the usual console price and take home some of the best exclusive games in one fell swoop. That's a win in our deal-hunting books.
View Deal

PlayStation VR | 5x games | PS4 camera | $289 at Amazon
The seasonal sales have so far all but wiped out stock of this popular Mega Pack PlayStation VR bundle. You can still grab the deal for $289 at Amazon and take home the headset, camera, PlayStation Worlds, Skyrim, Astro Bot, Resident Evil 7, and Everybody's Golf VR.
View Deal

PS4 Slim 1TB Console | Days of Play Bundle | $279 at Amazon
Get the limited edition Days Of Play Bundle on sale at Amazon for $282.01. The PlayStation 4 console comes in steel black and includes a 1TB hard drive and matching DualShock 4 wireless controller.
View Deal

Xbox One S | Gears 5 bundle | $225.99 at Amazon
Grab all five Gears games and an Xbox One S console for just a bit over $200 this week at Amazon. That's a fantastic price considering we've been seeing these deals rise in cost over the last week or so.
View Deal

Xbox One X | Star Wars Jedi: Fallen Order | $349 at Amazon
This is a popular bundle offering one of the most revered games of the last few months with Xbox's most powerful console yet. Plus, you're saving a good $150 overall and getting the game for free!
View Deal

Limited Edition Gears 5 Xbox One X | $349 at Amazon
This is a limited edition console design with a $100+ price drop - enough to grab any deal hunter's attention. In addition to a download code for the brand new Gears 5, you also get codes for Gears of War 1-4 and month of free access to Xbox Game Pass and Xbox Live Gold.
View Deal

Xbox One controllers | From $49.88 at Amazon
Amazon have chopped a few dollars off their Xbox One wireless controllers today, with a range of colors and designs seeing discounts across the board.
View Deal

Amazon Echo Flex | $19.99 at Amazon
$5 off an already cheap Alexa solution makes this sub-$20 accessory the most cost effective way to smarten up your home. The Echo Flex is essentially a plug-in Echo speaker with full Alexa functionality, allowing you to add smart features to every room in your house.
View Deal

Amazon Echo Dot | $34.99 at Amazon
The Echo Dot is the easiest way to kick start your smart home. A smart speaker in its own right, though not sitting in the highest tier, the Echo Dot ties together your smart home devices and services in one handy hub.
View Deal

Amazon Echo Show 5 | $69.99 at Amazon
Grab this smart display to open your home to a new world of Alexa commands and responses. Follow recipes, catch up on some Prime Video, video call, and personalise with your own photos on the 5.5-inch touchscreen display.
View Deal

Amazon Echo | $89.99 at Amazon
The all-new Amazon Echo is available for $10 off at Amazon at the moment. It's not the cheapest we've seen the fully fledged smart speaker go on Amazon recently, but if you're after the Dolby-powered speaker now you can save some cash with this Echo deal.
View Deal

iRobot Roomba 675 | $199.99 at Amazon
The iRobot Roomba is here to take care of all your vacuuming needs automatically. This particular model is fine on carpets and can even withstand pet hair. Self-charging and controllable through Alexa and the Roomba app, you're saving $100 with Amazon this week.
View Deal

4K and smart TVs on sale

Toshiba LF711U20 50-inch 4K UHD smart TV | $279.99 at Amazon
This Toshiba 4K TV deal is saving you over $100 at Amazon today. Plus, you're even getting Dolby Vision in the display - a fantastic feature at this price point.
View Deal

Samsung UN50RU7100 50-inch UHD HDR 4K TV | $347.99 at Amazon
This 2019 Samsung 4K TV is down by $150 right now at Amazon, meaning you can enjoy its powerful ultra-hd processor and PurColor detail for even less right now. This is a fantastic TV with crisp definition and Amazon Alexa built right in for good measure.
View Deal

Samsung QN49 49-inch QLED UHD 4K TV | $597.99 at Amazon
If you're after a higher than average quality display but aren't too enthused by the going rate of an LG OLED, these Samsung QLED TV deals are perfect. They offer a fantastic display with all the upscaling processing, HDR and smart features you'd expect from a high-end TV without the price tag to go with it.
View Deal

Samsung QN55 QLED 55-inch 4K HDR TV | $697 at Amazon
This is a great sub-$700 price on a usually well over $1,000 55-inch QLED TV from Samsung. That's also an extra $300 off the usual sales price for this particular unit. You're getting a fantastic quantum processor upscaling everything you see as well as all the Alexa and Google Assistant compatibility you could ask for.
View Deal