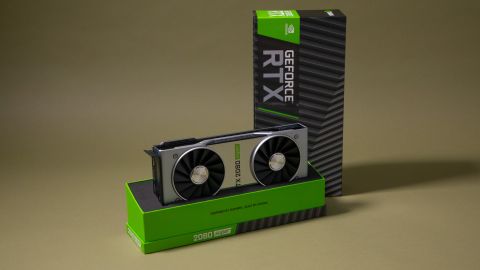 The Nvidia GeForce RTX 2080 Super is a more powerful graphics card than its predecessor, but the performance increase isn't enough to blow your mind. Still, it may convince people with older models to jump into the modern age of graphics cards.

AMD vs Nvidia: which should be your next graphics card?

And, so we have the Nvidia GeForce RTX 2080 Super, superseding the original RTX 2080. A quick look at the spec sheet will show just a slight improvement over the original, with marginally more CUDA cores and faster video memory (VRAM).

Nvidia Turing graphics have been out for almost a year now, with the Nvidia GeForce RTX 2080 Ti and RTX 2080 taking the lead. When those graphics cards first hit the street, the high price tag didn’t sit well with us, especially next to their predecessors. However, in the face of AMD Navi, Nvidia is finally feeling the pressure, rolling out more powerful 'Super' cards for less cash.

You read that right: the RTX 2080 Super is technically offering you more power for less money than the RTX 2080 did back at launch. While this means pretty much nothing for people who already own an RTX 2080 – something we'll dive into later – it does mean that people who have been waiting for an RTX 2080 price drop finally have a more powerful option to upgrade to without breaking the bank. To make the price point even sweeter, Nvidia was throwing in Control and Wolfenstein: Youngblood with the price of the card – now you’ll get Call of Duty: Modern Warfare.

Though this still leaves us wondering: why didn't Nvidia launch the RTX 2080 back in September with this hardware and at this price point? The answer probably has something to do with AMD Navi.

When you examine the Nvidia Super, and the technology behind it, it's not much different from the first round of Nvidia Turing cards that preceded it. With the Nvidia GeForce RTX 2080 Super, you're essentially getting a somewhat more powerful RTX 2080 with 3,072 CUDA cores, as opposed to the 2,944 in the RTX 2080, with a boost clock of 1,815MHz.

It’s minimal, but it's still an improvement. However, the more significant upgrade here is the faster VRAM: you're getting up to 15.5 Gbps of memory bandwidth, next to the 14Gbps in the standard RTX 2080.

Theoretically, this should help boost performance, especially with games and applications that chew through memory bandwidth.

On a hardware level, the Nvidia GeForce RTX 2080 Super definitely delivers improved performance over the RTX 2080. However, that really isn’t enough to really blow anyone's mind, like the RTX 2070 and RTX 2060 saw more of with their Super counterparts.

Then again, beyond hardware, there is a new software feature available that should actually be a boon to any hardware enthusiasts out there: FrameView. This is a benchmarking software and API that's considerably more accurate and even easier to use compared to many others.

FrameView will not only show you frame rates, frame times, GPU Usage and temperature, but also break down how much power your graphics card is consuming without having to rely on costly external hardware or iffy third-party software.

For most everyday gamers who are just trying to play the latest PC games, this might not be super useful. However, it should come in handy when you're either trying to troubleshoot potential issues, or are trying to overclock your graphics card to get its maximum potential.

The Nvidia GeForce RTX 2080 Super is, without a doubt, a powerful piece of hardware. With its 3,072 CUDA cores and 8GB of GDDR6 clocked at 15.5 Gbps, it's certainly one hefty graphics card. Yet, it isn't that much more powerful than the existing RTX 2080.

While testing the Nvidia GeForce RTX 2080 Super, we saw about 4-6% increased performance over the vanilla RTX 2080, in both our synthetic benchmarks and our anecdotal gaming testing.

For example, in the Metro Exodus benchmark at 4K using Ultra settings, we see around 40 fps on the Nvidia GeForce RTX 2080 Super and 38 on the older card. That's an increase of 2 fps, or just 5%. It's still an improvement, but one that really nothing to write home about.

In game, we definitely feel the power of the RTX 2080 Super. In titles like Metro Exodus and Shadow of the Tomb Raider, we are able to play at max settings at 4K with ray tracing enabled. Of course, this is with DLSS enabled to get playable frame rates, but at least that possibility is there.

That slight bump in performance makes a lot of difference for a graphics card that was right on the precipice of playable 4K performance in the first place.

Ultimately, a 4-6% improvement is still an improvement, and the fact that this graphics card is cheaper than the RTX 2080 was at launch definitely works in its favor.

It does, however, seem that Nvidia likely could have released the RTX 2080 at this new Super level at launch, but it was waiting for some more competition from AMD. Still, to be fair to Nvidia, AMD still doesn't have anything that comes close to the raw in-game performance of the RTX 2080 Super.

So, that leaves us with this question: who exactly is the Nvidia GeForce RTX 2080 Super designed for? Well, if you weren't swayed to upgrade from Pascal when the RTX 2080 and RTX 2080 Ti launched, the small uptick in performance here probably won't convince you either – and GTX 1080 Ti users especially shouldn't be swayed yet.

At least on raw performance, that is. You're still not getting ray tracing on that card.

However, if you're on a Maxwell card or older, and you've been waiting to jump into the RTX bandwagon, this more powerful and more affordable version of the RTX 2080 Super, or really any of the new Super graphics cards, makes for a compelling case to upgrade.

The Nvidia GeForce RTX 2080 Super is a more affordable, more powerful version of the original RTX 2080. That alone may be enough to convince people who have been sitting on that Turing fence. However, Nvidia Pascal users who were hoping for performance that comes close to the RTX 2080 Ti, but with an affordable price tag may not be satisfied.

Still, we appreciate the drop in price if nothing else, high-end graphics becoming more accessible can only be beneficial for everyone. So, if you're in the market for a high-end graphics card, now might be the time to jump on the Nvidia Turing train.