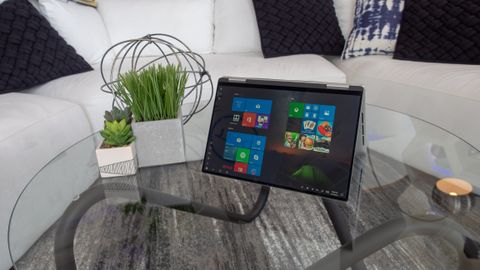 Dell XPS 13 2-in-1 2019 received many upgrades, from its display to the internal components inside.

Based on some brief time with the Dell XPS 13 2-in-1 – ogling its larger and sharper display and tapping away on its improved MagLev keyboard – we’ve come away hugely impressed and optimistic for Dell’s latest.

The Dell XPS 13 2-in-1 (2019) just got a major upgrade, and Dell took this year’s Computex as as an opportunity to showcase just what one of the best laptops on the market is capable of.

The company has improved upon just about everything within and without its flagship hybrid laptop. This 2019 update received many upgrades, from its display, webcam and keyboard to the internal components inside, culminating in one of the most impressive 2-in-1 laptops we’ve ever gotten our hands on.

Of course, we have to wait until we spend more time with it and give it more than just a once over at an event before we properly give it an official thumbs up. However, from what we’ve seen so far, we’re already hugely impressed and optimistic for Dell’s latest.

And, who knows? With Black Friday and Cyber Monday coming soon, Dell might have some money-saving deals to offer.

That’s backed up by 4GB of 3,733MHz memory (RAM) and a 256GB PCIe solid-state drive (SSD). Pricing beyond this point is unknown, but this laptop can be absolutely kitted out.

As with its proper XPS 13 for 2019, Dell has taken this opportunity to vastly redesign the chassis that contains its 2-in-1 version. Eagle-eyed fans will immediately notice the larger, 13.4-inch display within an even smaller frame on the horizontal of just 11.69 inches, which manages to cram Dell’s new-and-improved webcam in its proper place: above the display.

That display, which shines at 500 nits brightness when maxed out, is now a 16:10 aspect ratio to capture more content vertically – that should help a bit with work and web browsing. A brand new ‘sequential’ hinge connects the display to the keyboard deck, simultaneously creating room for hidden exhaust vents as well as elevating the keyboard to a more comfortable typing angle.

This hinge was also key in the laptop’s new enhanced screen-to-body ratio within the same profile as last year.

As for the keyboard, Dell has made leaps and bounds in trying to improve that as well: this is Dell’s next-generation MagLev keyboard, using new, original (0.7mm) switches that are quieter than before and larger key caps for a comfortable typing area. Dell’s new keyboard is 24% thinner than standard keyboards, and feels quite a bit like Apple’s ‘Butterfly’ switch MacBook keyboards, but still plenty punchy and accurate based on our limited testing.

Dell has also made the XPS 13 2-in-1 trackpad 19% larger than before, and with strong palm rejection to give you more space without any nasty trade-offs such as drifting cursors.

We’re told that this is the most CNC-machined aluminum ever used in a Dell product, and it shows. The laptop lid is coated in anodized aluminum that comes in your choice of silver or Dell’s new “alpine white” color for 2019, and its aluminum sides seem as if they were sliced off by diamond blades.

If you choose the silver option, the keyboard comes in Dell’s now-standard black carbon fiber finish, while the alpine white variety uses Dell’s new glass fiber material. We appreciate both for feel, but prefer the white for its unique look compared to most laptops out there.

Dell has gone 100% USB-C with the XPS 13 2-in-1 for 2019, equipping this model with two Thunderbolt 3 (USB-C) ports, a microSD card slot and a 3.5mm headphone jack. This gives the laptop both the option for charging from either side as well as outputting to as many as two 4K displays.

All of this hardware comes crammed into a frame that’s just 0.51-inches (13mm) thin and weighs a cool 2.9 pounds (1.32kg). That’s a lot of power and versatility for little more footprint than a MacBook Air.

We can’t much to the performance of Dell’s new 2-in-1 flagship, especially given that these are brand-new, 10nm CPUs we’re working with here. However, it’s important to note that the CPUs used here are not fanless designs, but rather much closer in power to that of the XPS 13 that released earlier this year, if not more so given the increase in transistors.

Does this mean that the XPS 13 2-in-1 will be more powerful than its traditionally stronger, straight-laced predecessor? Unless Dell issues a mid-cycle update to the XPS 13 before January 2020, it’s looking more than likely.

It’s exciting to think what that might mean for the laptop’s productivity chops, not to mention graphics potential. As for battery life, Dell anticipates a major boost there as well, aiming for up to 16 hours of general use away from the outlet. Even if the XPS 13 2-in-1 were to come within a few hours of that mark, it would blow away the 10-hour figures we commonly see in the latest MacBook Air.

Dell has seemingly pulled out all the stops for its flagship 2-in-1 laptop for 2019, crafting what will likely be its most versatile and powerful mobile computer to date. Not only is this Dell’s first laptop to use a 10nm CPU, but it’s the first to adopt Dell’s new 16:10 display aspect ratio and new keyboard technology. That’s a lot of new ground covered in a single device.

We will admit that Dell going thinner and thinner on the keyboard has us a bit worried for the same reasons we see Apple’s keyboards in the headlines every few months, but only time will tell whether Dell has cracked this code more reliably than its key rival. Also, we’ll believe that 16-hour battery life figure when we see it in action.

The XPS 2-in-1 line has clearly become as much of a proving ground for Dell’s latest innovations as its straight-up laptop stunners, and that’s an exciting prospect not just for this laptop, but for all of Dell’s forthcoming products. As for whether all of those new frontiers will pan out into a decent laptop, come back for our full review in the coming months.