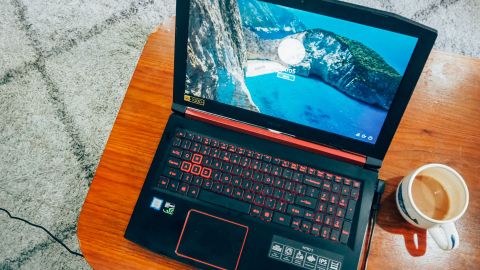 The Acer Nitro 5 is a gaming laptop win for budget-minded gamers.

We could forgive the cheap plastic back cover, the basic keyboard, and the heavy weight. But for a gaming laptop, there’s hardly any excuse for the tacky trackpad and the average screen. Budget gamers will rejoice on the price, but hardcore ones will find very little to delight in.

The Acer Nitro 5 is a gaming laptop win for budget-minded gamers, whose options are severely limited if they want a cheap laptop that can still handle the more demanding PC games right now.

Acer’s latest stab at this end of the PC gaming scene certainly ticks off the right boxes for your portable gaming needs, with a user-controllable dual-fan cooling system, an Nvidia GeForce GTX graphics card and a mid-tier 8th-generation Intel Core processor. Acer then rounds those out with a decent 1080p screen and a keyboard comfortable enough to play on for hours on end.

However, it must be noted that at its original low price, some sacrifices had to be made. How do these compromises affect this laptop’s overall performance, and are they big enough to matter? That’s what we’re here to find out.

Acer Nitro 5 AN515-52 Gaming Notebook £799.99 at Amazon
Save £300 off this excellent gaming notebook, which comes with an Intel Core i5 processor, 8GB of RAM, 512GB SSD and Nvidia GTX 1060 graphics card. Those are specs that will handle modern games with ease, and the screen has a fast 144Hz refresh rate for silky-smooth gameplay.View Deal

Here is the Acer Nitro 5 configuration sent to TechRadar for review:

The Acer Nitro 5 is one of the most affordable gaming laptops in the market today. With its $749 starting price, the same model that we tested, you get its most basic configuration. This exact configuration is available in the UK, though it does cost about £335 more.

This spec is, however, not available in Australia. The most basic configuration available there, according to the Acer website, is the AU$1,999 one that includes the Intel Core i7-8750H processor, Nvidia GeForce GTX 1050 with 4GB, 16GB of RAM, 1TB HDD and a 128GB SSD.

Several other configurations are on hand for the US market, the most expensive of which is the $1099. For that price, the laptop boasts an Intel Core i7-7700HQ processor, 16GB of RAM and a 256GB SSD, though its GPU and hard drive are the same.

Generally speaking, the Nitro 5 lines up against similarly priced and configured gaming laptops, like the Dell G3 15 and Lenovo Legion Y530, though user-controlled cooling is a first in this niche with this laptop.

As for look and feel, there’s a lot to be desired with the Acer Nitro 5. That’s not to say it’s plain bad – in fact, there are things we appreciate about it.

We like the subdued gamer look, with its red trimmings on the keyboard, backlight, trackpad and the top rear bar. The display hinges feel sturdy and secure, and the amount of ports on hand is a boon. More importantly, the laptop has a comfortable keyboard, and a user-controllable cooling system (more on those two topics later.)

Having said that, the Acer Nitro 5 design is also nothing to write home about. It’s pretty underwhelming, and the fact that it is a budget laptop means there will be signs of cutbacks – and these are noticeable. The screen lid, for example, is made of cheap plastic. The top cover and the area around the keyboard track fingerprints like crazy, and the screen has almost an inch of bezel around it, all of which make us feel like we’re PC gaming in the early aughts.

Worst of all, though, is the laptop’s trackpad. One could argue that you shouldn’t expect much from a trackpad to satisfy your gaming needs, but we have to say that this model’s trackpad is just ridiculous.

Jumping back a moment, a major win for the Acer Nitro 5 is its keyboard. There’s nothing overtly special about it. Sure, the symbols are in red, the backlight – which, by the way, is only activated when plugged in, so the keys are hard to see in the dark when its not – is red, and the WASD keys are emboldened in red paint.

Overall, this is just your typical, middle-of-the-road keyboard. That said, we find it comfortable as well as quite reliable. It’s fast and responsive, and we haven’t experienced any lags, missed presses or accidental presses. Whether you’re typing or gaming, that’s all that matters.

Now, here’s where we found a major complaint. We agree that gaming laptop trackpads are generally frowned upon in PC gaming, especially for FPS, RPG and action games. But, this laptop’s trackpad is so substandard you won’t even want to use it for regular computer tasks.

The trackpad gives a lot of travel and it’s very stiff, which means that you have to really do some hard pressing for anything to register, resulting in early finger fatigue. Buttons 1 and 2, located in the front left and right sections of the trackpad, respectively, have it worse, resulting in many missed presses. We gave up on it after a day, and switched to a proper mouse.

These three things we’re lukewarm about. The camera, which offers video recording at 720p 30fps at its highest setting, is grainy. It’s just fine for web chats, but don’t expect much quality imagery produced here.

The laptop’s sound is a little hyped on the high-end and very echoey, though you could personalize it with the equalizer in the Dolby Audio software. In short, it’s yet another laptop with subpar audio – par for the course, basically (unless you’re Origin).

Finally, the 1080p display, while still sharp and clear, is a little on the darker side (even at its brightest setting) and is practically the exact opposite of bezel-free. We’ve seen other gaming laptops at this price put a little more focus on the display, which we’d like to see here.