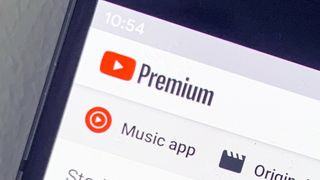 Good news if you're paying for a YouTube Premium subscription every month: you can now download videos for offline playback at resolutions of 1080p, up from the previous limit of 720p.

The change was first spotted by Android Police, with the Full HD (1080p) option appearing when YouTube Premium users try and save videos to their phones.

You might not see the option yet though – apparently the feature is being slowly rolled out across the YouTube apps for iOS and Android. Make sure you're running the latest version of the app before attempting a download.

Alongside never having to watch adverts, offline downloads are one of the best perks of YouTube Premium, and you should be able to see the difference on phones with bigger screens and sharper resolutions.

There had been rumors as far back as February that YouTube was planning to upgrade the maximum resolution for downloads – but now it appears its engineers are finally getting around to it.

Higher resolution downloads means more space used up on the phone of course, though it's a trade-off that most people will be happy to make. As yet there's no option to download 4K videos in 4K resolution.

Apparently the new and improved higher quality setting is rolling out in all the markets where YouTube Premium is available, though there's not been any official comment from YouTube or Google as yet.