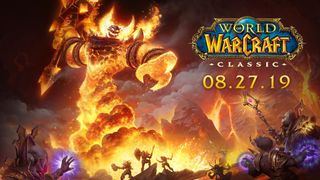 World of Warcraft Classic, AKA WoW Classic, has finally launched, rolling back the clock on 15 years of updates to the world's most popular MMORPG to give fans a glimpse of what the game was like close to when it originally released.

Long waits to get into WoW Classic servers have marred the return somewhat, but for the most part, it's proving to be a very enjoyable stroll down memory lane.

But what's the big deal about reviving a 15 year old version of a game that never really went away?

Well, can you imagine a world without World of Warcraft? After 15 years spent exploring the wastes, wildernesses and wonders of Azeroth, it’s hard to think of a gaming landscape without Blizzard’s all-conquering massively multiplayer RPG in it. And, with World of Warcraft Classic, we get the opportunity to experience those first fledgling days with the game, all over again, and see just why it was so influential.

In the world of online games, 15 years is an incredibly long time – it’s almost unheard of for a game to maintain a community like World of Warcraft has over that period of time, especially when it requires a subscription to play. Plus, to keep that fanbase loyal, Blizzard has added more and more to World of Warcraft over the years, piling expansion on top of update on top of expansion.

What then, if you pine for the simpler, early days of the game, when World of Warcraft was fresh, new, and a little more mysterious?

Don those rose-tinted glasses – that’s where World of Warcraft Classic comes in.

What is World of Warcraft Classic? And what's different?

In a nutshell, World of Warcraft Classic is the game as it existed in 2006, two years after the game first launched, and before the release of the game’s first full expansion pack, The Burning Crusade.

It’s this point (Patch 1.12: Drums of War) where the original World of Warcraft, pre-expansion add-ons, was at its strongest, having had a few years of bug squishing and gameplay refinements under its belt. However, it was a considerably tougher, slower game back then, encouraging team play to take on tough foes rather than pandering to today’s solo-friendly play.

Playing was also more of a grind, with the less-populated lands feeling larger in comparison to today, where they are littered with quest options and easily-accessible faster traveling options.

If that sounds like a turn off, you're perhaps missing the charm that these early days held. Communities had to be stronger to take on foes, players had to be hardier as there was less in-game hand holding (like basic quality of life elements, such as quest markers), and the game world generally felt a little more unknown and dangerous. Going out into the great unknown felt like a true adventure.

Things like the Dungeon Finder, letting you easily match-make for groups will be gone (not to mention the fact you’ll have to walk to any dungeon entrance, rather than be instantly transported to them), while some of the visual flourishes the game has received over the years will also be dialed back.

Choosing your specific skills in the talent system will be more of a considered task too – you’ll have to go find a trainer to reset skills if you don’t like how you’ve worked out in Classic, whereas the standard game now lets you re-spec on the fly.

While the current World of Warcraft game has undeniably seen a ton of improvements built into it over the years, it hasn’t stopped some from feeling nostalgic about these earlier days of the game.

A desire to re-experience the history of the game had become so great prior to World of Warcraft Classic’s reveal that there were many private servers, set up by hardcore fans, that were essentially DIY efforts to resurrect those halcyon days of WoW.

But as is often the case with nostalgia, things aren’t always quite as rosy as you remember. Beta early access has given some players a sneak peek at what to expect – and it’s been a bit of a shock for some.

Classic players have been reporting a series of bugs to developers Blizzard Entertainment. Except the problem is, they’re not bugs. They’re actually accurate, old-school features of how the game used to play.

From minimap quest markers to player-balancing attack distances, World of Warcraft has received innumerable small quality of life improvements over the years. As the saying goes, you only miss the things you love when they’re gone – the same goes for patch fixes.

“The nature of WoW Classic sometimes invokes different memories for different players, and this leads to certain misconceptions for some about what is or isn't working as intended,” explains Blizzard in a Battle.net post.

So, what is, or isn’t, a bug in World of Warcraft Classic? Here’s what Blizzard has highlighted as being a non-bug in the new, old game mode:

The launch of WoW Classic has been plagued by server issues. Put simply, more players are trying to get online to play the game than developer Blizzard can currently handle.

WoW Classic server queues have gotten so bad in some cases that wait times of up to three hours (and, in extreme cases, much, much longer) have been commonplace.  This should settle once the initial rush to play calms down, but Blizzard has already moved quickly to open more servers to alleviate the strain.

The sheer number of people playing (estimated to be upwards of 2 million) has lead to some funny, heart-warming community events taking place in the game too. WoW Classic has many quests that require you to loot specific monsters for key quest items. As these monsters only spawn sporadically, the inhabitants of over-populated regions of the game have taken to literally organising in-game queues to give every player a fair shot at finishing quests. Now that's gaming at its best.

"We, as a society, formed this queue." - #WoWClassic players standing in queue to get the head of a freaking mob 🧡 pic.twitter.com/53q8YZxa8026 August 2019

Will World of Warcraft Classic get updates and expansions?

World of Warcraft Classic will indeed be getting updates to roll out newer features over time, though it’s not yet clear if it’ll be getting full-on expansion add-ons. Blizzard will be keeping an ear to the community to see just how far the resurrection of Vanilla game will go. But the consensus seems to be that fans would be happy to see the game reach its third, hugely popular expansion pack, Wrath of the Lich King.

While Blizzard makes that decision, it has committed to waves of content releases over time. As it stands, World of Warcraft Classic players can look forward to:

In addition, there will be a staggered roll out of PvP (player versus player) content within those phases:

Whether new expansions eventually arrive or otherwise, it's looking like there's going to be plenty of content coming to keep this from being more than just digital tourism.