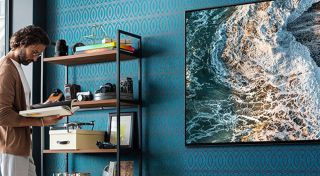 It’s inevitable that technologies are replaced by their newer, more advanced successors – and just as plasma flatscreens were replaced by OLED TVs, so too is OLED at risk of being beaten by a new panel technology.

If that sounds unlikely, given the hold OLED currently has on the premium TV market, it may be too early to say. But Samsung, the world’s largest TV manufacturer, and one that’s been backing its own LED and QLED alternatives to OLED for several years now, is looking ahead to a hybrid TV technology quite clearly aimed at wiping out the competition. That technology is QD-OLED.

Samsung Display CEO Lee Dong-hoon has spoken out on potential plans to bring QD-OLED to market, telling The Korea Herald that “the company is making good efforts” to to manufacture a commercially available model. So while it's unlikely we'll see a QD-OLED model at IFA 2019, it looks like it might be on the show floor in the near future.

When contacted directly, a Samsung spokesperson clarified that it was still developing its own QLED and Micro-LED technologies, adding that it had no firm plans regarding QD-OLED, citing issues with existing OLED panels that need to be addressed:

“Samsung Electronics believes various technology improvements should precede for the existing OLED panel technology to be adopted to TVs, and no decision has been made on whether we will adopt the QD-OLED panels to our TVs.”

But with a new manufacturing line being set up to replace recently-closed LED plants (via The Elec), it very much looks like Samsung is betting big on the technology.

Ok, enough with the acronyms already

What does QD-OLED actually mean, you ask? It can be broken down into two parts. The first, “QD”, refers to the quantum dot filter that Samsung employs in its premium QLED (quantum light emitting diode, or quantum LED) televisions. The second, “OLED”, refers to the organic LED panel used in the premium ranges of most other big TV brands today, including Hisense TVs, Sony TVs, Panasonic TVs, and LG TVs.

OLED TVs have some huge advantages, including thin panels that don’t require a backlight, as the pixels in OLED panels are self-emissive (meaning they emit their own light). This makes for incredible contrast and brightness control, though can make for an overall dimmer output than its LED counterparts.

That’s where QD-OLED comes in. Rather than being wholly self-emissive, a QD-OLED panel would use a blue-light OLED panel acting as a backlight, with a quantum dot filter able to convert this into red or green light, for a full color display.

This would still make for the thin televisions and color-rich displays OLED is known for, while correcting the dim output of OLED panels compared to LEDs.

We know Samsung is working on the technology. We also spoke to the Europe Product Development Director at TCL, Marek Maciejewski, who called QD-OLED a possible solution to the current limitations of OLED panels: “We think that for very large screens with very high color saturation and brightness, that inkjet-printed QD-OLED is a solution.”

Maciekewski added that “We see no future in terms of efficiency and brightness” for traditional OLED panels, and was certain that “all major OLED manufacturers are developing this.”

When will QD-OLED hit the market?

With Samsung refusing to give a timeline, or official confirmation of any QD-OLEDs coming to market, it probably won’t be soon. Manufacturing lines are only now being set up, and there will likely be an intensive R&D process as Samsung makes and amends its prototypes.

Samsung won’t throw out its current LED, QLED, or Micro-LED ranges for a single panel technology, so it’s likely we’ll see a QD-OLED model arrive in a couple of years’ time, but probably not before 2021.

An official statement from Samsung on the matter said that “Samsung Electronics is pioneering the premium TV market through a two-track strategy that involves both QLED and Micro-LED TVs.” Even if QD-OLED will have a part in that strategy, the company will be investing in a number of technologies rather than betting on a single horse.

We expect to see a single model appear in the range at first, much in the vein of Samsung’s flagship 8K model, the Q950 8K QLED, but that may depend on the price point for the new TV.

Can a reduced price point be enough to save OLED?

We reported earlier in the year on the prospect of inkjet-printed OLED panels, which vastly simplify the production process and could lead the way for significantly cheaper OLED TVs (around 15-25% off current market value).

Price is seen as the main barrier for more mainstream adoption right now, followed shortly by the limited model sizes currently available – though new production lines are being opened to develop 48-inch models alongside 55-inch, 65-inch, and 75-inch ones. As QD-OLED and inkjet methods develop in tandem, it could be we see OLED gain the advantage it needs to continue in its current form – or morph out of necessity into a new technology entirely.

We often see new TV models shown off at events like the upcoming IFA 2019 expo. We expect it will be too early to see this technology on the show floor, and it will likely be another year or two before any QD-OLED models are actually in sight. But Samsung appears to have a clear development path ahead of it. If that means consumers get an improved picture over the already high-quality OLEDs on the market, we’ll consider that to be a good thing.