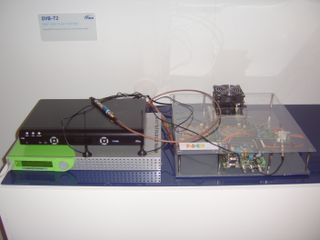 DVB-T2 on the way

Freeview HD is on course for a UK launch in Autumn 2009, with the Granada regions the first to receive the service.

Massive sales of PlayTV from PlayStation, a move onto Microsoft's Windows Media Center and the successful DVB-T2 trials by the BBC which will allow HD channels to be broadcast free-to-air have prompted Freeview to release a bullish press release insisting that its offering is 'fit for the future'.

The timing is no coincidence, with Freesat celebrating 100,000 sales and Sky finally being given the go-ahead for Picnic, a service which will see the broadcaster's premium content on digital terrestrial television (DTT).

More exciting than ever

Ilse Howling, Managing Director of Freeview said: "With Freeview on PS3 and Media Center and HD just around the corner, being a Freeview viewer is now more exciting than ever.

"We're delighted people will be able to watch Freeview on PCs and gaming devices in other rooms in the home."

"Our success as the number one digital TV service in the UK undoubtedly remains down to the simplicity of Freeview's proposition.

"No monthly bills, no contract and access to the most watched digital TV channels continue to be extremely attractive, especially for people looking to save money on their monthly bills in the credit crunch."

The last statement seems to hit directly at the likes of cable company Virgin Media, IPTV offerings from BT and Tiscali, and BSkyB's satellite service.

With HD still a year away, it appears that Freeview is wary of losing its edge in the current competitive market – despite being the most popular digital television service.