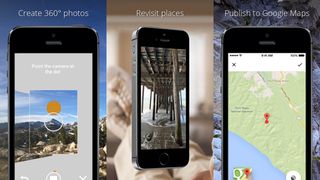 Line the image up with the dot and you're set

If a picture speaks a thousand words, then a Photo Sphere must speak millions. Now iOS users can get in on the spherical photo wordplay, too.

Google has released a Photo Sphere app for iPhone 5, iPhone 5S and iPads running iOS 7 and up, marking the first time the feature has been available outside of the Android ecosystem.

The app creates panoramas that stitch together multiple photos spanning not just a 360-degree horizon, but also "up, down and all around," as the app's official description says.

A simple custom interface guides users in taking perfect panoramas, ensuring the software will be able to effectively combine all the images.

Why ever leave the house?

But the app also lets users share their photo spheres over Twitter, Facebook, Google+, and email, or add them directly to Google Maps, where anyone can view them.

Photo Sphere creators have been using that Google Maps compatibility to create virtual tours of businesses, landmarks and other locations since 2013.

And best of all? Google's Photo Sphere app for iOS is free.