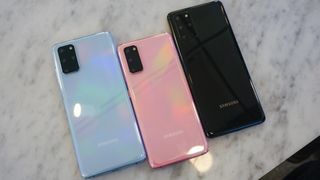 There are four shades to choose from at launch, but not all of them are available for all three phones, or in all regions. With that in mind we’ve created this guide, highlighting all the different combinations.

Note that more colors may be released later, and that the availability of each shade may also change over time, but at the time of writing you have the following options.

Cosmic Gray is the only shade that all three Samsung Galaxy S20 models are available in at the time of writing.

This is a metallic color, ideal for those who want a dark shade but not just black. Cosmic Gray won’t be the most eye-catching color scheme, but as such it’s also smarter and more professional-looking than some.

It’s available in the US, UK, and Australia, with all three phones.

That’s not to say you shouldn’t choose it though. It’s a deep, dark black that – thanks to the glass back – still manages to have a bit of shine to it.

Cosmic Black is available in the US, UK, and Australia, with both the Galaxy S20 Plus and Galaxy S20 Ultra.

It’s a light, youthful blue and is likely to prove more eye-catching than the shades above, but perhaps also more divisive. Still, if you want a splash of color on your phone, this is one of only two options – and the only one for the Samsung Galaxy S20 Plus.

Cloud Blue is available in the US, UK and Australia for both the S20 and S20 Plus.

Finally, there’s Cloud Pink, and this shade is currently only available for the standard Samsung Galaxy S20. In a sense, that makes it the most exclusive of the shades, even if it’s the most low-end phone in the range that you can get it with.

This is a light pink, and as with Cloud Blue it’s quite showy and will definitely catch people’s eyes, but it’s also a less professional, ‘safe’ shade than Cosmic Black or Cosmic Gray. That said, it’s nowhere near as bright as some pinks, so it remains classy.

If you want your Samsung Galaxy S20 to stand out, then Cloud Pink would make a great color choice. It’s available in the US, UK, and Australia.