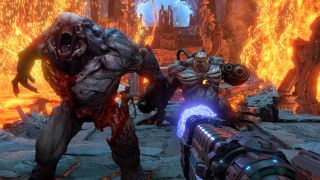 QuakeCon is an annual celebration of all things Bethesda. Held in Dallas, Texas, the gaming convention sees thousands of Bethesda fans from around the globe gathering to hear the latest announcements about - and get their hands on - the developer’s most anticipated upcoming titles.

But this year, parent company ZeniMax Media decided to include its European fans in the celebration by establishing the first ever QuakeCon Europe in London - a free public event that aims to bring the QuakeCon “vibe” to those outside North America.

We attended QuakeCon Europe on its media day but found that, when it comes to capturing the essence of QuakeCon, there’s a lot to be desired in its European cousin.

As we mentioned before, QuakeCon Europe is a free public event. But, before you get carried away, it’s also a ticketed event and all the tickets have been claimed - that’s over one thousand tickets. Sorry.

The European leg of the convention is being held in London’s famous Printworks, typically used for raves and special events. It’s a pretty huge venue but, with over one thousand people crammed in, it’s going to be a tight squeeze.

That would be fine, but it doesn’t seem there are enough demo stations set up to accommodate that many attendees. In fact, on the day we attended, there didn’t seem like a huge amount to do full stop.

While the Doom Eternal demo is the major draw for QuakeCon Europe (it is Year of Doom, after all), it’s arguably the biggest draw for the event. Other stations carry Rage 2 (with new DLC vehicles and boss), Quake Champions, Wolfenstein: Young Blood, Elder Scrolls Online, Elder Scrolls Legends, Blades on Switch, Fallout 76 and the Doom collection on Switch. However, some of these games are already out - or will be soon.

It also simply doesn’t look like there’s enough space for over one thousand people to queue and - in London’s current heatwave - we’re not sure how inclined you would be to.

Despite our concerns about the logistics of fitting one thousand Bethesda fans into the venue, and the lack of stations for that number, Bethesda has promised there will be plenty for fans to do on the public day such as activities and panels.

We’re not quite sure what these activities will involve but the panel schedule is available to view online and involves streamed panels from the main QuakeCon event and live ones in the London venue. However, there are nowhere near the same number of events as the main QuakeCon boasts, nor is there the same emphasis on being a LAN party event.

Despite its teething problems, QuakeCon Europe is still a fantastic opportunity for Bethesda fans who can’t quite reach Texas to feel like part of the community. Perhaps in later years the event will come into its own - there’s no denying the heart is there.