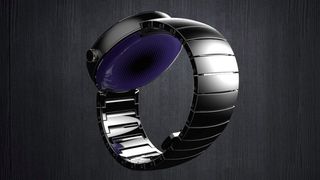 That was a pretty big hint

The much-coveted Moto 360 will charge wirelessly via magnetic induction, a Motorola spokesperson has said.

The information was given to Techzine and translated for TechRadar. The publication says it spoke to Motorola programme manager Philip Worth, who confirmed suspicions that the watch would use a wireless method for juicing its battery.

Wireless charging is currently used on a number of smartphones, but the Qualcomm Toq is the only major smartwatch charging without wires right now.

It explains the lack of any visible ports on the watch in the Moto 360 promo videos. Plus, it means we can stop speculating that the Moto 360 might charge itself using body movement, as some had guessed.

The Moto 360 is rumoured to be arriving this July with a price of around AU$365. Motorola told us it wouldn't comment on the story.