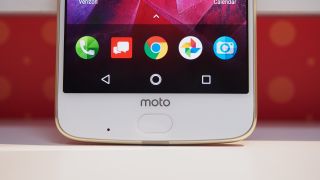 The Motorola One Power first appeared in a leaked render, but now the rumored phone’s existence is getting just a little bit more believable, though we’re still not too sure about that name.

We’re still taking this leak with a dash of skepticism, but it looks like Moto’s notch-equipped flagship to take on the iPhone X (and a lot of other phones) could be on its way after all. The phone has surfaced in a photo from 91mobiles that shows off its boot screen, which shows off the thicker chin bezel at the bottom and the notch up top that looks to be wider than we’ve recently seen on the OnePlus 6.

Some details near the phone’s bottom appear to have been smudged using image editing tools, so it’s not clear if that section will host the Motorola logo or if it will be plain black.

Moto is expected to launch its next generation of Moto Z phones soon, but the One Power could soon reign as the company’s focus for taking on the fleet of flagship smartphones from the likes of Samsung, Apple and more in 2018.