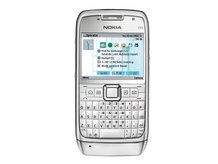 The Nokia E71 - one of its top business handsets

Nokia has announced plans to extend the Mail for Exchange mobile email application to a total of 43 mobile phones - so you'll never have an excuse to not work EVER AGAIN!

The system will also be available pre-loaded on future E-Series and N-Series mobile phones, so Nokia is clearly making the same work / pleasure cross-over Apple has made with its iPhone.

Nokia intends to make the Mail for Exchange application work on all S30 3rd edition-enabled handsets in the near future, which is close to 80 million users.

The system can be run via 'Email set-up' on the home screen, launching the application once downloaded or running the setup wizard in the PC Suite.

After that, users can have all the fun they're probably used to from the BlackBerry welded to their hand. That's right, calendar, contacts and obviously email.

The move comes after Nokia decided to split from the BlackBerry Connect application, in order to win back its share of the business user market.