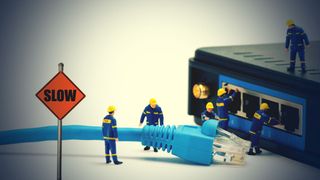 The consumer watchdog Which is banging the broadband drum again, providing fresh research that points to the fact that many folks in the UK are still struggling with poor connections, with the majority of punters having encountered some sort of issue pertaining to their broadband in the year gone past.

The consumer watchdog’s latest findings are that no less than six out of every 10 people have experienced some manner of problem with their broadband in the past year, and that the majority of those that are ‘frustrated’ with the situation. (We’re guessing some people are further along the anger scale than that, too).

Indeed, a third of those who have experienced issues have been completely cut off from the online world – i.e. their connection went down for a period of time – and this has hit some users where it really hurts: in the pocket. In other words, that downtime has actually cost the person in question money.

The author of the Which blog post even complains about his ‘shoddy’ broadband, which meant that he couldn’t watch the end of a rented online film recently, thanks to a connection outage which lasted until after the rental period expired.

And plenty of people seem to have taken the time to post complaints on the Which site. One user wrote: “I found I had better broadband speed when I was in the wilds of Washington State in the US and also in the south of Paris than I do in London.”

Another user from mid-Wales said: “Download speed 1.1Mbps. Upload speed 0.3Mbps. Almost unusable. Why do we have to pay the full price?”

Want to check your own broadband speed? Then handily enough, Which has just launched its own speed checker which you’ll find here.

We tried the checker and it seemed fine for gauging download and upload speeds, although the ping time result we got seemed very suspect. According to Which, our fibre connection had a ping of around 110ms, when normally it’s about 20-30ms (Speedtest.net showed it as 19ms when we tried it immediately after the Which test).

Still, as ever, your mileage may vary. Which’s checker also allows you to compare results with others in your local area, and for those who aren’t happy with their broadband speed, the consumer watchdog has knocked up a template letter of complaint for your ISP.

The other option is you can take action yourself – right now – to try and improve your broadband in some measure, and to that end, we have a full guide on how to test and improve the speed of your internet connection in Windows 10.

Although no amount of tinkering with your setup is going to turn a terrible broadband connection into a good one, obviously enough.