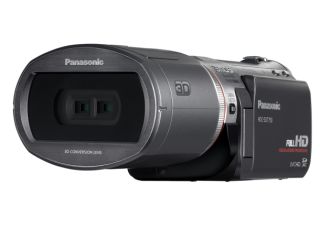 The head of Panasonic Europe says that the content shortage which has bedevilled the nascent 3D TV industry will only be short lived.

Speaking exclusively to TechRadar at the launch of the brand's first consumer 3D camcorder, the HDC-SDT750, CEO Laurent Abadie says that the 3D floodgates are about to open.

"This year you will see a lot more 3D movies released," he said.

"The movie industry is rushing after the success of James Cameron's Avatar and the gaming and broadcast industries are close behind."

And there is another industry which he says could have a dramatic effect on the 3D market: pornography.

"The adult industry will be very important for 3D," he predicts. "It's already a key player for the internet and Pay TV.

He goes on to say that adult studios are already placing orders for the brand's 18,000 euro AG-3DA1 pro-3D camera (last used in Europe to shoot games from the 2010 Roland Garros tennis tournament), and the new HDC-SDT750 is certain to be on their wishlist as well.

The more legitimate side of the movie-making business has been slow to release content, preferring instead to sell exclusivity deals on 3D movies to hardware suppliers.

Samsung was the first to sign an exclusivity deal with Dreamworks for Monsters Vs aliens, and Panasonic followed by pocketing Coraline and Ice Age 3 from Fox.

Only Sony Pictures has placed a 3D movie into retail, with the 3D Blu-ray release of Cloudy with a chance of meatballs.

"This is always what is done with new technology, new media," says Abadie.

"This is just for the launch and it will not last long once we have a wider range of 3D Blu-rays.

"By the end of this year, we expect something like 40 3D Blu-ray titles to become available."