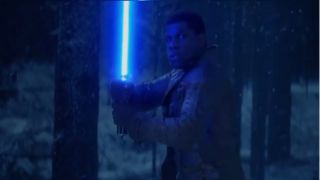 If you're hungrier than a rancor for new Star Wars info, then today's leak is like an all-you-can-eat Twi'lek buffet.

On its Instagram account, Star Wars Ltd. has released a short five-second looped clip of John Boyega's character Finn wielding a blue lightsaber. A deep voice growls, "There's been an awakening...have you felt it?" as signaure Star Wars music starts to play.

More exciting however is that an observant fan pointed out that it's not your run-of-the-mill plasma weapon Finn is clutching: it's Anakin's old blade.

Just how Finn, a Stormtrooper from the First Order (the group that filled the void of the Empire after the Battle of Endor), came to possess it remains a mystery, but it's a sweet teaser for what's to come on December 18 when the film hits theaters.