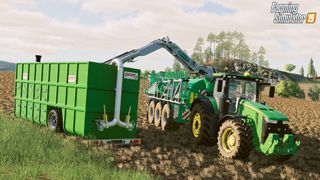 The league will run 10 tournaments across Europe, with successful squads accumulating circuit points for their wins, then come the end of the season, the top teams will get a chance to duke it out at FarmCon 2020. The winner will be crowned Farming Simulator Champion and will snag a prize of €100,000 (around £90,000, $115,000, or AU$160,000) – there’s no word on whether EU subsidies will supplement the winnings.

That’s the main cash prize, and the remaining money will be given to the winners of the individual tournaments leading up to the grand final. Sponsors include the likes of Intel and Logitech.

The competition will use the latest edition of the game, Farming Simulator 19, with players taking part in three verses three matches, although the exact details of those bouts weren’t specified.

Last year, a Farming Simulator Championship was held – effectively a test season for the full esports league, without the big prize money – and that used hay bale stacking as the means to sort the wheat from the chaff and determine the winning farmer.

Farming Simulator is actually quite popular in Europe, although the concept of an esports competition based on a farming game will doubtless provoke its fair share of double-takes.

Although the player base of the game has taken to Twitter to air concerns that organizing this new league could distract from the core work of updating Farming Simulator 19, but the devs have assured folks that this won’t be the case.