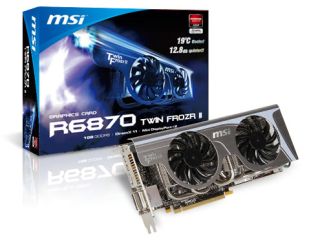 MSI has announced the R6870 Twin Frozr II – with the latest addition to its AMD-toting graphics card range coming soon.

"With the enhanced cooler performance and usage of Japanese solid capacitors MSI's R6870 becomes the best choice for everyone looking for a cool graphics card, low noise environment and expanded overclocking potential."