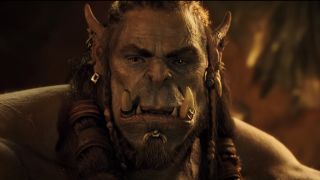 Durotan, the orc chieftain, struggles to save his clan from extinction

Legendary Pictures released the official first trailer for the upcoming Warcraft movie today, and it's something to see.

Based on the best-selling game franchise, the trailer for Warcraft: The Beginning debuted at the open of this year's Blizzcon in Anaheim, California. The film's director, Duncan Jones, along with members of the cast were on stage to present the trailer.

While the storyline has so far remained largely a mystery beyond the title indicating we're heading to the beginnings of the franchise, the trailer fleshes out a bit of details. We see Orcs and Humans battling it out, but we also see fa tenuous relationship forming between the two races, hinting at a more complex storyline than just humans fighting evil green orcs.

The filmmakers look to have created a rich, expansive and beautiful world, combining human actors with CG characters and scenes that are truly epic to behold. Check it out for yourself below:

The Warcraft franchise has spanned genres, from a fantasy strategy series to a collectible card game to the massively multiplayer online RPG, World of Warcraft, which has shattered records for being one of the most-subscribed-to and highest-grossing video games in history, with over 100 million accounts made in 2014.

While Legendary Entertainment is putting out Warcraft, series publisher Activision Blizzard announced today that it's opened its own production studio to begin development of television shows and movies based on its properties, including Call of Duty.