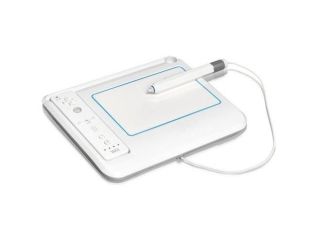 THQ has launched a pen and tablet peripheral for the Nintendo Wii called the 'uDraw' for use with a painting app for the console called uDraw Studio.

uDraw is what the publisher is referring to as a "GameTablet", and features a Wii Remote slot, which is how it communicates with your Wii console.

The pen is attached to the device, to ensure the kids don't lose it. uDraw features a 9 x 7-inch drawing panel and also uses the Wii Remote's buttons to control the app.

The minus-button on the Wii Remote acts as a last-action delete control, letting you (sorry, 'the kids') quickly scrap your last sloppy brushstroke.

THQ is already planning further educational drawing applications for the Wii, including a draw-along platformer called Dood's Big Adventure and a version of the family gaming classic Pictionary.

The publisher will be launching the innovative tablet-and-pen device and uDraw Studio in a $70 bundle in the US. No word as yet from the publisher on UK pricing and release plans.